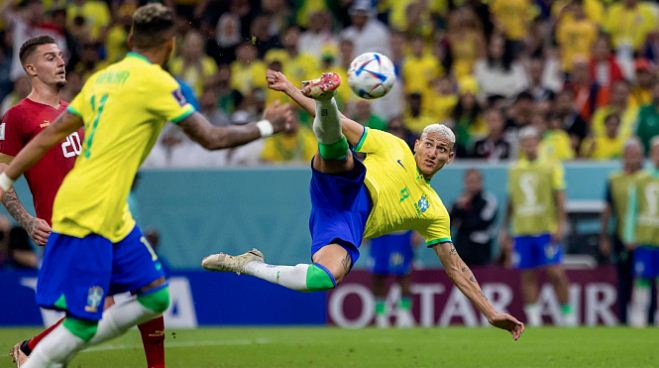 Brazil and Portugal qualified for the round of 16 at the Qatar 2022 FIFA World Cup on November 28. While Brazil edged a spirited Switzerland 1-0. Portugal got the better of Uruguay 2-0. In other matches of the day Cameroon and Serbia drew 3-3 and South Korea lost a 2-3 thriller to Ghana.

Cameroon, Serbia draw
Aleksandar Mitrovic made it 3-1 for Serbia early into the second-half before Cameroon struck twice through Vincent Aboubakar and Eric Maxim Choupo-Moting to go 3-3 level. Both the teams tried to find the winner but the match ended in a 3-3 stalemate. Serbia struck right in the first-half injury time to dramatically take a 2-1 lead against Cameroon. Strahinja Pavlovic scored the equaliser before Sergej Milinkovic-Savic put his side in the lead. Earlier, Cameroon defender Jean-Charles Castelletto put his side ahead by heading the ball into the back of the net from a corner kick.

South Korea los to Ghana
South Korea’s qualification hopes for the FIFA World Cup 2022 Round of 16 are in jeopardy after suffering a 2-3 loss against Ghana. With a draw and a loss after two group games, South Korea sit bottom of Group H with just a point.

Ghana sit second in the table with three points with Portugal on top with six points. Uruguay is also at the bottom with one point courtesy of its goalless draw with Ghana.

Brazil beat Switzerland
Casemiro struck a beautiful goal to give Brazil a 1-0 lead in the 83rd minute. The Manchester United midfielder’s strike was enough for Brazil to edge Switzerland and qualify for the Round of 16. Earlier, Vinicius Jr. seemed to have put Brazil in front in the 65th minute but VAR intervened and saw his opener being chalked off because of an offside call in the build-up. Switzerland didn’t create many big chances and were made to pay by Brazil in the end.

Portugal advance
Bruno Fernandes scored a second-half brace as Portugal defeated Uruguay 2-0 in a Group H match to qualify for the Round of 16. The deadlock was broken in the 54th minute when Fernandes’ cross was missed by Cristiano Ronaldo and flew straight into the net. The Manchester United midfielder added a second in injury time from the penalty spot as Portugal moved to the top of Group H with six points. Fernandes could have scored a hattrick but was denied twice, once by Sergio Rochet and then by the woodwork. Rodrigo Bentancur was close to opening the scoring in the first-half for Uruguay, while second-half substitute Maxi Gomez rattled the post, minutes after replacing Darwin Nunez.