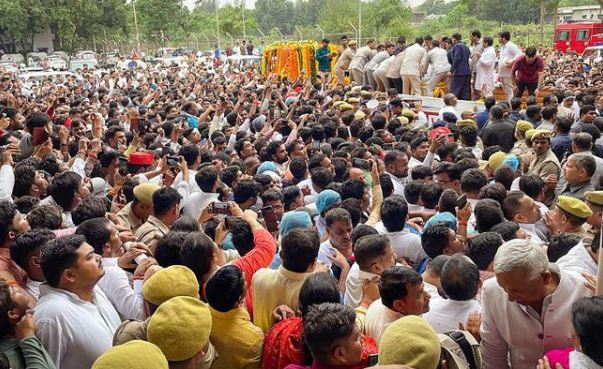 Samajwadi Party patriarch Mulayam Singh Yadav was cremated at his native Saifai village in the Etawah district of Uttar Pradesh on Tuesday afternoon.

People in large numbers were headed for the last rites of the Samajwadi Party founder in Saifai, the intermittent morning drizzle adding to the sombreness.

The Samajwadi Party founder and former Uttar Pradesh Chief Minister died aged 82 at a Medanta hospital in Gurugram on October 10.  His mortal remains were brought to Saifai Monday evening and kept at his ‘kothi’ where thousands descended to pay their last respects to “Netaji”, as Yadav was fondly called.

Party workers and people in their hundreds riding cycles, motorcycles, cars, SUVs and other means of transport were headed to Saifai from nearby areas on October 11, 2022 morning for the final rites.