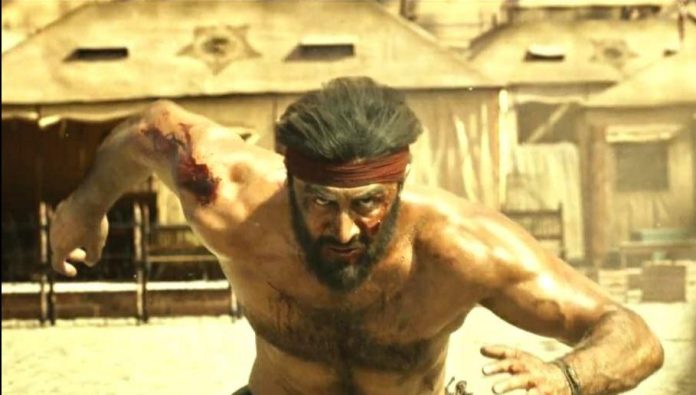 Ranbir Kapoor is playing a larger-than-life quintessential Hindi film hero with the action entertainer Shamshera. Ranbir, who is coming to the big screen four years after he delivered the blockbuster Sanju, is pitted against Sanjay Dutt who is playing an evil, merciless, cold-hearted brute force of nature, Shuddh Singh.

Ranbir Kapoor essays the double role of father and son in his upcoming film, Shamshera, and he has now revealed that director Karan Malhotra and producer Aditya Chopra initially approached him for the role of the son alone. Shamshera marks the return of Ranbir Kapoor to films after four years, since he was last seen in Rajkumar Hirani’s Sanju.

Sanjay Dutt plays the antagonist in the film that also features Vaani Kapoor in an important role.

The story of Shamshera is set in the fictitious city of Kaza, where a warrior tribe is imprisoned, enslaved and tortured by a ruthless authoritarian general Shudh Singh. This is the story of a man who became a slave, a slave who became a leader and then a legend for his tribe. He relentlessly fights for his tribe’s freedom and dignity. His name is Shamshera.

The adrenaline-pumping entertainer is set in the 1800s in the heartland of India. It has the big promise of a never seen before Ranbir Kapoor. Sanjay Dutt plays Ranbir’s arch-enemy in this huge casting coup and his showdown with Ranbir will be something to watch out for as they will ferociously go after each other with no mercy.

Trailer
The trailer of Shamshera takes us back to the year 1871. In a voice-over, a legend about a man who led an uprising against the Britishers is narrated. We get shots of a rugged Ranbir Kapoor as Shamshera as he wields a battle-axe on a horse. We then get a look at Ranbir Kapoor in another avatar of a playful young man who is quite the crowd-pleaser.

Pre-review
Ranbir Kapoor has had his fair share of “coming of age” storylines, and he’s excited for Shamshera, which he says is a break from his previous work. Sanjay Dutt plays the antagonist in the action-drama film, which is produced by Yash Raj Films and directed by Karan Malhotra. Kapoor will play the part of a dacoit in this film.

The trailer of Shamsehra revolves around the pre-independence era and focuses on the rise of a legend named Shamshera who carries his Father’s legacy and writes the upcoming destiny of his people. To put it straight, Ranbir Kapoor’s performance as Shamshera is captivating.

The two minutes, fifty-nine second trailer makes his acting talent abundantly visible and the hard work deserves praise. On the other hand Sanjay Dutt as always didn’t take a moment to disappoint his fans in the role of Shuddh Singh an Indian man who serves for the Bristishers and helps them in taking down Shamshera who is on a hunt to bring justice with his gang. Vaani Kapoor’s role in the film is going to be Shamshera’s love interest, we see a blend of urban and tribal India as their chemistry gets intense.

Shamshera will also include a romantic aspect. He stated it was about the same “A classic Hindi film has it all: humour, action, and romance drama. And all of the films I’m working on are geared toward that goal; we’re attempting to incorporate all of these elements.”

The trailer introduces Ranbir in a grand fashion with the camera constantly capturing him at a low angle to highlight his grandeur in his community. Sanjay Dutt, who also played the villain in Agneepath and totally aced his performance, looks like a menacing figure who takes pleasure in brutality on his own people. In one scene from the trailer, his character is using a long lash to beat up a villager in front of a scared kid who’s devastated and sitting naked on the ground witnessing the act of barbarism.

While the action, the VFX and the entire tone of the film that helps it look like set in the pre-independence era make an interesting watch, Vaani’s role disappoints again. The trailer introduces the actress as a girl dancing in various scenes and advising Shamshera against challenging the Britishers and their allies.

Production
Shamshera was officially launched in May 2018 by Yash Raj Films through a motion poster, starring Ranbir Kapoor as the titular character Shamshera.

Sanjay Dutt was cast as antagonist, and Vaani Kapoor was signed to play the female lead.To prepare her role, Vaani Kapoor took professional training in Kathak.Kapoor portrays a dancer.

Principal photography began in December 2018.For the film, a massive fort was built at Film City, Goregaon, requiring 2 months of preparation and the effort of nearly 300 workers.Filming ended in September 2020.

Budget
Shamshera is one of the big budget Bollywood movies that will be released in 2022 made with a budget of Rs 150 crores.