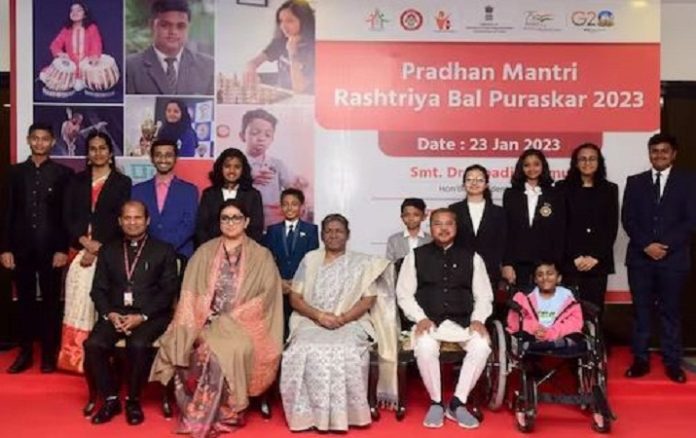 This award carries medals and a cash prize of Rs 1 lakh and a certificate. Six boys and five girls from 11 states and UTs were awarded.

The awards are for the children’s exceptional achievements. This award recognises excellence in six categories for children aged 5-18, including art and culture, courage, innovation, academic performance, social service, and sports.

The awardees were as follows: In the field of Art and Culture, 16-year-old Aadithya Suresh from Kerala, M. Gauravi Reddy (17) from Telangana, Sambhav Mishra (16) from Odisha and Shreya Bhattacharjee (12) from Assam.

In the field of Innovation, Aditya Pratap Singh Chauhan (17) from Chhattisgarh and 8-year-old Rishi Shiv Prasanna from Karnataka who is the youngest Certified Android Application developer with an IQ of 180. Aditya Pratap Singh Chauhan has developed MICROPA, an efficient cost effective technology using computer algorithms, to detect and filter microplastic from drinking water.

In the field of sports, Hanaya Nisar (16) from Jammu and Kashmir and 11 year-old Kolagatla Alana Meenakshi from Andhra Pradesh and Shauryajit Ranjitkumar Khaire (10).

In the field of Bravery, Rohan Ramchandra Bahir (15) from Maharashtra was conferred with the award for jumping into a river to save the life of a woman.