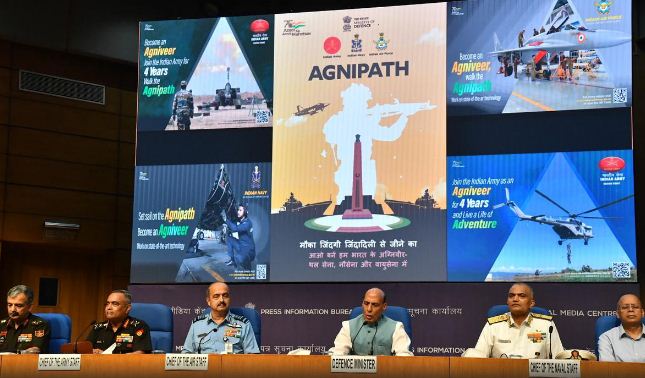 India’s defence minister Rajnath Singh, along with the chiefs of three armed forces announced the launching of the Agnipath scheme on June 14. As per this scheme, youth will be recruited for the armed forces for a period of four years. These recruits will be called Agniveers.

Enrolment under the scheme will be open for both men and women for the four-year period. This period will include training of six months. The scheme was approved by the Union Cabinet on June 14.

The scheme Agnipath – allows patriotic and motivated youth to serve in the Armed Forces. Around 25% of the recruited Agniveers will be enrolled in Armed Forces as regular cadres post the four-year service.

However, sources made it clear that the Agniveers who leave after four years will not get ex-servicemen status. This means that there shall be no entitlement to gratuity and pension benefits.

The AGNIPATH scheme has been designed to enable a youthful profile of the Armed Forces. It will provide an opportunity to the youth who may be keen to don the uniform by attracting young talent from the society who are more in tune with contemporary technological trends and plough back skilled, disciplined and motivated manpower into the society. As for the Armed Forces, it will enhance the youthful profile of the Armed Forces and provide a fresh lease of ‘Josh’ and ‘Jazba’ whilst at the same time bring about a transformational shift towards a more tech savvy Armed Forces – which is indeed the need of the hour.