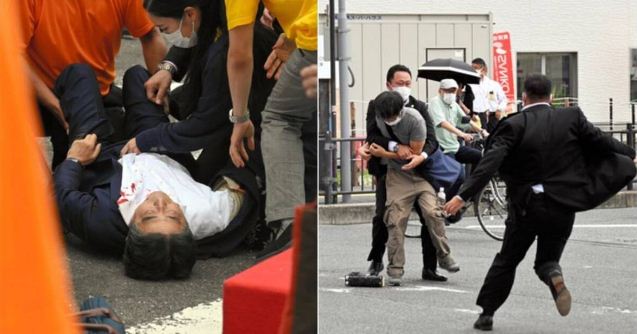 Political rivalry/hatred returned to Japan as the country’s former popular Prime Minister Shinzo Abe was shot twice while delivering a speech in Nara around 11.30 am local time this (Friday, July 8) morning. He died later.

A profusely bleeding Abe collapsed and was rushed to the hospital. According to LDP officials, he was shot in the chest. Police have nabbed one suspect.

Abe, 67, was making an election campaign speech ahead of Sunday’s election for the Japan Parliament’s upper house and was giving a speech when people heard gunshots. Police arrested a male suspect at the scene on suspicion of attempted murder, NHK said.

Japan’s NHK public television has reported that the former prime minister is in ‘heart failure’. It was not immediately clear how serious Abe’s injuries were or if he was still displaying vital signs.

Abe, 65, was Japan’s youngest post-war Prime Minister when he came to office in 2006. The grandson of a former PM Nobusuke Kishi, and the son of a former Foreign Minister Shintaro Abe, he was destined for politics.

He was given the Padma Vibhushan- India’s second-highest civilian award in 2021 by Indian Government.