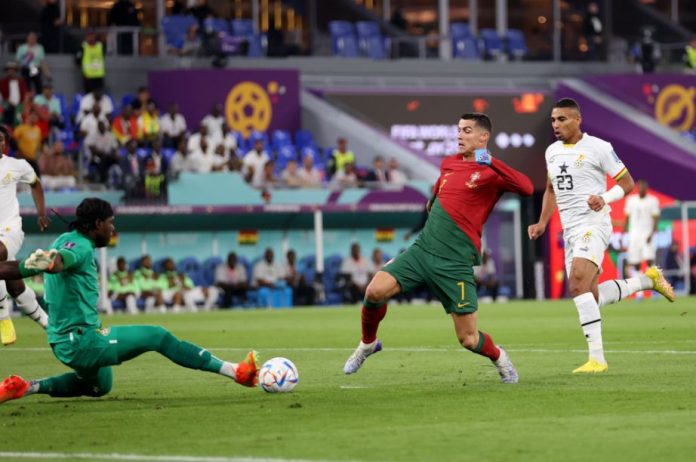 Two critical matches were played on November 24 and early November 25, in which Portugal were given a scare by minnows Ghana and Brazil romped home against Serbia, in the FIFA World Cup in Qatar. In other matches on November 24, Belgium beat Canada, Switzerland beat Cameroon and Uruguay drew with South Korea.

The Portugal match was important because of Christiano Ronaldo, and he did score, though off a controversial penalty ward by American referee Ismail Elfath. That was the beginning of the scoring after a barren first half. The second half was electric as Portugal won 3-2.

Cristiano Ronaldo got on the scoresheet as Portugal edged out Ghana 3-2 in a Group H match at the Stadium 974 in Doha. As Ronaldo converted the penalty, he became the first man to score at five World Cups.

Andre Ayew equalised for the Black Stars, but Joao Felix and Rafael Leao scored their first World Cup goals to put Portugal 3-1 up. Osman Bukari made it a tense finish with a close-range header and Diogo Costa almost handed Inaki Williams a stoppage-time equaliser only for the forward to slip at the vital moment.

Brazil win
Richarlison reflected on his tears when he feared he might miss the World Cup after scoring both goals as Brazil opened their bid to win a sixth title with a 2-0 win over Serbia in Doha on Thursday.

“It is a boyhood dream come true,” the Tottenham Hotspur forward told Brazilian broadcaster TV Globo after netting a second-half brace in the Group G match at the Lusail Stadium. “We played well, especially in the second half when our opponents started to tire and we took advantage of that.”

Belgium beat Canada
Canada played their first World Cup fixture in more than three decades as they crossed swords with Belgium’s ‘Golden Generation’ and went down by a lone goal.

The World Cup in Qatar could be the last chance for Belgium’s Golden Generation to justify the tag. The Red Devils have previously had slip-ups at major tournaments failing to lift a major tournament.

A single moment of brilliance from Michy Batshuayi handed Belgium a narrow 1-0 win over Canada in their World Cup Group F encounter at the Ahmad bin Ali Stadium.

Thibaut Courtois was called into action inside of 10 minutes after VAR determined Yannick Carrasco handled the ball in the area, but the Real Madrid keeper denied Canada’s Alphonso Davies from the penalty spot to keep the game scoreless.

Switzerland Beat Cameroon
Breel Embolo scored the lone goal of the game as Switzerland defeated Cameroon 1-0 in a Group G match between the sides at Al Janoub Stadium, Al-Wakrah. Cameroon started the game on a dominating note with some really good attacks on display. Switzerland too had their chances at the start but neither side could score any goal in the first half of the game. However, in the second half, Embolo broke the deadlock with a calm and composed finish from inside the box in the 48th minute.

Uruguay draw
Uruguay hit the post twice but couldn’t break South Korea’s defence as both teams played out a pulsating 0-0 draw in a Group H clash at the Education City Stadium. Diego Godin rattled the post with his header in the first-half, before Federico Valverde’s effort crashed the crossbar. South Korea, too, had plenty of openings but couldn’t find the back of the net. South Korea started the game with plenty of pressing in the first 45, before Uruguay started to dictate tempo after the break.

Hwang Ui-jo had the biggest opportunity for Korea but he blazed his effort just over the bar. Darwin Nunez had a couple of cracks in front of the goal but dragged his effort wide. In the second-half, South Korea heavily relied on the counters but failed to create something major.