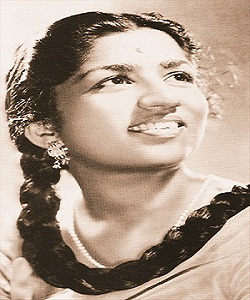 By Chanakya
Once in a while, a person is born who straddles life, the entire world she/he sees laid ahead, and even takes over your thoughts, your feelings. Lata Mangeshkar was such person, a giant, in not just music, but in everything she chose to delve in.

Lata Mangeshkar wasn’t just a Bollywood playback singer, providing joy to millions of her fans in India and abroad, she was a giant in the field, whose strides measured way beyond the normal.

There is a debate as to how many songs she has sung – 25,000 or 50,000. The Guinness Book of World Records kept count, but then gave up. But how important is that, before a voice that thrilled fans through at least three generations, across several genres of films and music? How important are statistics, before a genius whose immortality was ensured in our minds?

That was Lata Mangeshkar, who passed away on February 6 in Mumbai, ending a career spanning over seven decades. She was 92. Her songs will still be played at weddings, at national events, her legacy will still be held close to our hearts, within our families.

It is said that every single person in this country, of all ages, has a Lata song as his or her favourite. There are people who have had biases towards Asha Bhosle, her sister, but the legend of Lata remains uncompromised.

Lata has recorded more songs than the Beatles and the Rolling Stones combined. There is hardly any person in the world’s music scenario who has not been, even if a little, influenced by Lata. Even in these Covid pandemic times, hundreds lined up to pay their last respects to Lata. It was more pertinent, because Lata supposedly did not belong to the Millennial age, it has been said.

Let us be clear. It was not just Bollywood that made Lata what she was. She sang non-filmy songs in several other languages, such as Puja songs in Bengali, ghazals etc. They are still in discs, dear to collectors’ hearts. That’s what makes the discography difficult.

It was a poignant time for Aasha. On Instagram, she put up a beautiful childhood picture, of her and Lata. She titled it: ‘Wo Bachpan ke din…’ It was a photo featuring the two toddlers, probably the earliest of their pictures.

Early life
Lata was born in Indore on September 28, 1929. Her father, Dinanath Mangeshkar, was the owner of a theatre company and was a reputed classical singer in his own right. It was from him that Lata first got singing lessons at age five. She also got talim from renowned singers Aman Ali Khan Sahib and Amanat Khan, and even at that age, her singing prowess and her ability to master vocal exercises impressed everybody.

Lata lent her voice to the world of music and films for over 50 years. In Bollywood, top actresses, such as Nargis to Preity Zinta soared on her voice. That apart, she also sang ghazals, pop songs, etc.

Tough start
Her entry, though, was not as easy as it has made out to be. Around the 1940s it was the time for singers with heavily nasal voices, such as Noor Jehan and Shamshad Begum. Lata was found to have a voice that was too high-pitched. When her father died in 1942, the situation became somewhat critical, because suddenly she was the one responsible for providing succour to her family.

As a desperate measure, she also went into acting, having acted in eight Hindi and Marathi films between 1942 and 1948. Her earning kept the home hearth warm. Then she debuted as a playback singer in the Marathi film Kiti Hasaal (1942). The song was not heard by the public, because it was edited out at the last moment.

In fact, Lata changed the style of singing in Indian films, from nasal to high pitched. Still singing with her were Geeta Dutt and Shamshad Begum.

Asha came into the singing arena in the late 1950s and the two ruled Indian playback singing right through to the 1990s.

The rest is history.

Mausam koi ho is chaman me

Rang banke rahenge in fiza me

She was Awarded Bharat Ratna in 2001.

In 2009, Mangeshkar was awarded the title of Officer of the French Legion of Honour, France’s highest order.

In 2012, Mangeshkar was ranked number 10 in Outlook India’s poll of the Greatest Indian.