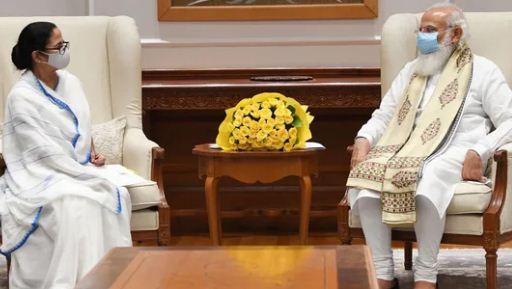 When Mathematics has never worked well with politics.The subject is limited to counting the votes polled, the percentages in application and with probability ratios that may or may not provide succour. Of course it works when money is being counted, but that is a subsidiary (though essential) aspect of the main process. Hence, when you see Mamata Banerjee, the Trinamool Congress (TMC) supremo and West Bengal Chief Minister invite Prime Minister Narendra Modi to inaugurate the Biswa Bangla Global Business Summit in Kolkata in April next year, we should not show surprise. Neither should we let shock betray our countenance when she hosts industrialist Gautam Adani in Kolkata.

These she has done, and what people say about them is none of her concern. The Prime Minister has accepted the invitation and Adani has tweeted that he looks forward to seek business opportunities in the state. While inviting the Prime Minister was a political decision, Modi’s presence will induce the presence of Adani as well. However, one has to remember that in the past Mamata had invited Mukesh Ambani too, for a business summit. That trip of the Reliance head had yielded nothing.

The invitation to Modi was given by Mamata on her recent Delhi trip. It was a potpourri of issues that she discussed with the Prime Minister, including the recent Central order on extending the jurisdiction of the Border Security Force (BSF) from 15 to 50 km in Border States, which also includes Bengal. Mamata said “it (the extension of jurisdiction of the BSF) disturbs the local law and order situation in the state from the confrontation between the central and state law and order agencies.” Mamata has asked the PM to withdraw this order.

Mamata has said that she told the PM that Centre-state relations should not suffer in a federal system just because of political and ideological differences and narrated to the PM a recent incident in which firing by BSF personnel had killed three people in Cooch Behar.

Sounding like a veteran and elder statesman, Mamata said: “We are not against BSF or central agencies, but it is a question of federalis. the state’s interest must be kept in mind. If you have to secure the border, the state will help the Centre with additional forces;there should be a meeting and the order should be revoked.”

Those were the critical issues that were discussed, but then came the crux of the problem. She brought up the issue of central debts to the state which amounts to Rs 96,655 crore. Mamata informed the media that the PM has said that he will look into the pending amount and get back to the CM.

Focus on industry?
Discussions had moved to industry. West Bengal is in dire straits, with little investment flowing in, through the 11 years that Mamata has been in power in the state. In figures the state has a decent placement among states of the country, but these figures are no lighthouse to the realities on ground. That is a trifle different. West Bengal is one of the biggest developers of and host to small scale industries in the country, with even the participation of women entrepreneurs within that being the highest in the country. The end result, however, is that despite this available manpower and experienced technical people, the business atmosphere in this sphere remains pretty dim.

The state also desperately needs investment and resurrection of old industries, such as jute. This could turn out to be a good move, if some results come off it. Mamata told the media: “He (PM) said he is also in favour of jute production and so asked him to instruct the jute commissioner to resolve the issue of a recent cap that has been imposed which has caused a lot of distress for the jute workers and jute growers.”

“Sounding like a veteran and elder statesman, Mamata told the PM: ‘We are not against BSF or central agencies, but it is a question of federalism.’”

If that was the sum and substance of Mamata’s meeting with the PM, her follow-up meeting with Adani has seen strong reaction in the media, as well within the TMC. The big story that could emerge – and this is if Adani feels interested – would be the restructuring of Kolkata Port Trust. KPT is one of the best port systems in the country, with an inland port, as well as a sea port. Silting has virtually destroyed much of it and ocean going vessels aren’t able to move in to any decent distance up from the estuary. Major investment in this would be beneficial to local industry, as well for goods deliveries from other states, plus Nepal.

However, to do this, KPT will have to move to the private sector, a rather touchy subject in West Bengal. The cash strapped and investment-strapped state cannot live on hope and fresh air alone. There will be disruption. But it has to be seen whether this development possibility and the resultant disruption will be at the cost of the common man and the MSME sector of the state.

The political profile
Political news around Mamata is gaining huge traction around media houses these days, with the CM having said to the media in Mumbai that was where she met the Shiv Sena head honchos, as well as Sharad Pawar “where is the UPA? There is no UPA.” The issues of the state are critical and cannot be washed away with a brush of national politics. Somewhere, within his deep political concentration and analyses, Mamata’s advisor Prashant Kishor may have failed to address the financial situation of the state of West Bengal.

Money matters
Who will lead the opposition coalition is the big question, but how will all these efforts be funded should be a bigger question. Remember, the state of West Bengal is complex; its problems are unique, coming down from the disastrous 34 years of Communist rule. In her occasional efforts to boost industry one big hurdle that has always come Mamata’s way has been land acquisition. Remember, that even the BJP had to back off from a new land acquisition act. In Bengal, this is a very tender issue. Land holding in the state is super fragmented and availability of contiguous non-farm land for industry has become almost impossible.

Mamata has thought of the service sector more than the already established industrial sector. This means that the stress of the government has always evaded industry in the state. That leaves in the lurch a huge section of skilled and semi-skilled labourers, and there is no effort at all to re-skill them towards other emerging industries.

Within this desperate situation back home, Mamata’s national ambitions have struck a wrong chord. Something is not right. There is talk about how, even if TMC wins Goa, will that help Bengal, or how Meghalaya’s sudden realisation of the TMC can provide better conditions in Bengal. The politics of Mamata is interfering with her administration in Bengal, it seems.

The UP wrangle
Mamata has been stretching her hand of friendship to Uttar Pradesh as well. She has, expectedly, avoided the Congress, but has received the promise of support from Samajwadi Party’s Akhilesh Yadav in a possible effort to form an opposition unity.

Akhilesh Yadav has said he was willing to extend all cooperation. That is good news. Which means that the TMC may spend money in UP too, and since it has no truck with the Congress, old Congress supporters will not be available for the funding process.

Let us be frank. Ideology is only a small part of this ‘unity’ process. As said earlier, money plays a huge part. Mamata and Akhilesh have to drum up enough financial support and that is a difficult task against the BJP and in the absence of Congress for any real ‘unity’ to coalesce. If local businessmen are not paying for this, will this mean a drain on the already strained financial resources of West Bengal? That will not be a good thing.

The Adani factor
The Adani Factor can be squeezed in here. Even the other day, TMC’s erudite and vociferous MP Mahua Moitra was tweeting against Adani’s funds and how so much was unknown. While this could blow up in Mamata’s and TMC’s face, there are other more important imperatives that this might help address.

Mamata may have realised that on her own she might even reach Delhi, but not bring industry to Bengal. That is the sad truth, and within this, the TMC might even have to adjust. The Congress has done this many times over, again and again, so has the BJP. Big industry, simply, has to move to Bengal. There is no alternative. In its absence Mamata may lose her own base soon.

Who will lead the opposition coalition is the big question, but how will all these efforts be funded should be a bigger question. Remember, the state of West Bengal is complex; its problems are unique, coming down from the disastrous 34 years of Communist rule.

So might Adani bring political risks too, along with him? He might. After all, the largesse he has received from the BJP for so long has made him the richest man in India and even in Asia (on and off, switching places with Mukesh Ambani). While this manipulation will have to be handled carefully by Mamata, the after effects may be good. Crony capitalism has existed around the world forever, especially prominent in Britain and in the US in the days of the Raj and in early development years of the US. In the long run, society has been better off for it. This is the stark, possibly horrible, truth, but truth, nevertheless.

In the final analysis, as said before, Mata will have to balance her political ambitions very carefully with her state’s desperate needs.