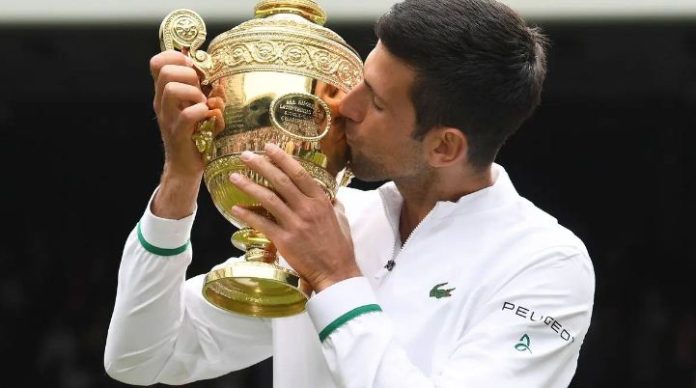 Novak Djokovic won a seventh Wimbledon title and his 21st Grand Slam crown on July 10 (Sunday) with a four-set triumph over Nick Kyrgios. Kyrgios started well, but his challenge shriveled thereafter. Top seed Djokovic won 4-6, 6-3, 6-4, 7-6 (7/3) to equal Pete Sampras’ mark of seven titles at the All England Club. With this Djokovic moves within one of the men’s record of eight held by Roger Federer.

The 35-year-old Serb is now one Slam ahead of Federer in the all-time race and just one behind Rafael Nadal’s record of 22 majors.

“I’m lost for words for what this tournament and this trophy means to me,” said Djokovic. “It always has been and will be the most special one in my heart.” Djokovic also praised Kyrgios after their once-frosty relationship thawed at Wimbledon.

7 Dead in Gujarat As Heavy Rain Leads To Flood-Like Situation
Seven people died as heavy rain led to flood-like situation in many areas in Gujarat on Monday (July 11). Visuals showed rivers in spate, overflowing dams and flooded streets due to torrential rains.

The weather department has issued a warning of heavy to very heavy rainfall with isolated extremely heavy rain in several districts for today and during the next five days.

The situation in Gujarat’s Valsad has become uncontrollable due to floods. And here water has entered the low-lying areas. The Auranga River is above the danger mark. NDRF has rescued 300 people.

The situation in Gujarat’s Valsad has become uncontrollable due to floods. And here water has entered the low-lying areas. Auranga river is above the danger mark. NDRF has rescued 300 people.

In south Gujarat, Dang, Navsari, Tapi, and Valsad districts were affected while the rain-hit districts in Central Gujarat are Panchmahal, Chhota Udepur, and Kheda

Bumrah breaks Lara’s world record
India captain Jasprit Bumrah bludgeoned a hapless Stuart Broad for 29 runs to create a world record for maximum runs off a single over in Test cricket, beating the legendary Brian Lara’s feat by one run. The world record stayed with Lara for 18 years. He hit South African left-arm spinner Robin Peterson for 28 runs in a Test match in 2003-04, which included four fours and two sixes off six legal deliveries.

In the end, the Indian skipper was not out on 31 off 16 balls with four boundaries and two sixes.

Gujarat to host 36th National Games
Gujarat chief minister Bhupendra Patel has announced that his state will host the 36th National Games between September 27 and October 10. The prestigious event is being held after a gap of seven years, the last being in 2015 in Kerala. The gap happened due to several reasons, including the coronavirus pandemic in 2019-2020.

“I am happy to announce that Gujarat will host the National Games between September 27 and October 10. I thank the IOA (Indian Olympic Association) for quick acceptance of Gujarat’s proposal,” he said in a tweet.

The National Games will have more than 34 sports disciplines, which will be conducted in six cities. More than 7,000 sportspersons from across the country are expected to showcase their might in indoor and outdoor events such as athletics, hockey, football, volleyball, lawn tennis, table tennis, judo, wrestling, kabaddi, kho-kho, mallakhamb and yoga.

India, which will surpass China as the world’s most populous nation by 2023, is projected to have a population of 1.668 billion in 2050, way ahead of China’s 1.317 billion people by the middle of the century.

A year of real highs and bitter lows