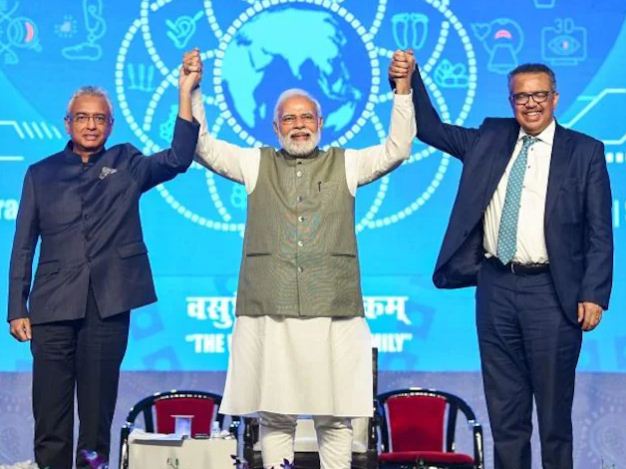 The ground breaking ceremony of the first-of-its-kind WHO Global Centre for Traditional Medicine (GCTM) was performed on April 19 in Jamnagar, Gujarat, by Prime Minister Narendra Modi, with World Health Organization (WHO) Director-General Dr Tedros Ghebreyesus and Mauritius Prime Minister Pravind Jugnauth. Earlier, the Prime Minister had said the GCTM would go a long way in enhancing wellness in society.

Modi said: “The WHO Global Centre for Traditional Medicine is a recognition of India’s contribution and potential in this field. WHO, via this Centre of traditional medicine, has done a new partnership with India. About five decades ago, Jamnagar established the world’s first Ayurveda based University. It is named the Institute of Teaching and Research in Ayurveda. Jamnagar’s contributions towards wellness will get a global identity with WHO’s Global Centre for Traditional Medicine.”

Tedros said “Namaskar” and then added “Kem chho… (how are you)” as he tried to impress the crowd gathered to witness the foundation ceremony of the centre.

India’s top multi level marketing (MLM) company, Amway, is in a soup. Recently, the Enforcement Directorate attached assets worth Rs757.77 crore belonging to the FMCG company Amway India, linked to a money laundering case. The probe agency believes the company is involved in a scam in the guise of a multi-level marketing strategy.

Attached properties include land and factory building of Amway at Tamil Nadu’s Dindigul district, plant and machinery, vehicles, bank accounts and fixed deposits, according to an ED statement.

Earlier, the ED had provisionally attached immovable and movable properties worth Rs 411.83 crore and bank balances of Rs 345.94 Crore from 36 different accounts belonging to Amway.

In its probe, the ED alleged that Amway was running a Ponzi scam in the guise of direct selling multi-level marketing networks. It is observed that the prices of most of the products offered by the company are exorbitant as compared to the alternative popular products of reputed manufacturers available in the open market.

“The entire focus of the company is about propagating how members can become rich by becoming members. There is no focus on the products. Products are used to masquerade this MLM pyramid fraud as a direct selling company,” the ED said.

Two bomb blasts at a boys’ school in the Afghan capital Kabul have killed at least six people and wounded more than 20, officials say. The blasts happened at the Abdul Rahim Shahid high school in the Shia-dominated west of the city. The number of dead and wounded is likely to rise.

Local sources also said a hand grenade had been thrown at a nearby tuition centre for students preparing for a university entrance exam. There was no immediate claim of responsibility. Islamic State militants have attacked the area in the past.

The area in which the attacks took place – Dasht-e-Barchi – has frequently been the target of attacks by the local branch of the Islamic State group because of its largely Hazara Shia Muslim population.

11 killed as truck rams into trolley in Rajasthan

Eleven members of a family were killed and seven others injured after their pick-up truck rammed into a tractor-trolley in Rajasthan’s Jhunjhunu district on April 19, police said. The accident took place near Leela Ki Dhani on the Jhunjhunu-Gudha Gorji highway around 1 pm, when 22 members of the family were returning from Lohagarh after immersing the ashes of a relative, police said.

Prime Minister Narendra Modi and chief minister Ashok Gehlot expressed grief over the accident. “Anguished by the tragic accident in Jhunjhunu. Rs 2 lakh each from PMNRF will be given to the next of kin of the deceased. The injured would be given Rs 50,000,” the PMO tweeted quoting Modi.