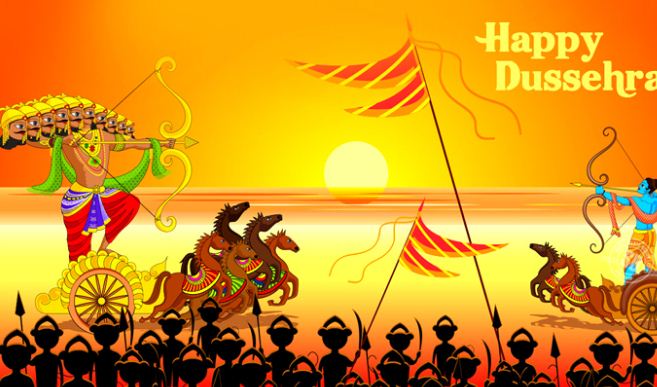 Vijaya Dashami, or Dussehra is the 10th and the last day of Durga Puja; this year it’s October 5. All over India Hindus celebrate this auspicious day in many different ways. In some parts, it’s the day Goddess Durga killed the demon Mahishasur. After nine days of Navratri, the festival culminates with the immersion of the idol of Durga. This was also the day King Rama, an avatar of Vishnu, killed Ravana, the 10-headed demon. To celebrate the legend huge effigies of Ravana are burned and with it burns all evil. Vijaydashmi’s eternal promise that good will always vanquish evil.

Vijayadashami, or Dussehra, has several different stories related to it, with the common theme being the victory of good over evil.
It is often reported that the story of Rama’s victory over Ravana can be traced as far back as 5114 BC. This famous Hindu celebration says that the eighth incarnation of Lord Vishnu, Lord Rama, killed the ten-headed devil Ravana. Lord Rama, along with his brother Larkshman and follower Hanuman, trekked to Ravana’s kingdom to fight him and bring back Sita, Rama’s wife. On their way Rama prayed to Durga and was eventually victorious.

It was from around 1500 BC that the first Durga Puja celebrations are mentioned, with these in Dinajpur and Malda. These celebrations often draw upon Goddess Durga’s assassination of the demon Mahishasura.