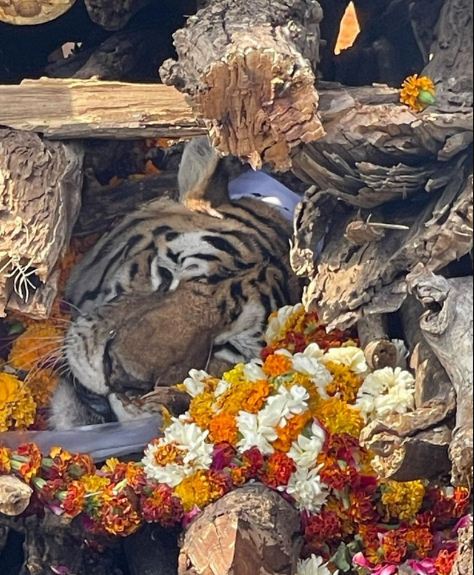 Collarwali,  the legendary tigress of Madhya Pradesh’s Pench Tiger Reserve in Chhindwara district, has died after prolonged illness. She had earned the title of “super mom” after giving birth to 29 cubs, a record in India. She was 16.

Having given to the reserve so many litters, she had also earned the name Mataram. Her 29 cubs had come in eight litters between 2008 and 2018. More satisfactorily, 25 of the 29 cubs survived.

Alok Mishra, field director, Pench Tiger Reserve has been quoted as saying: “The tiger was ill due to old age. She was last spotted near Bhura Dev Nullah on January 14. She was spotted lying down. She was under the observation of veterinary doctors and was unable to walk. She passed away at 6.15 pm the next day.”

He added: “The Collarwali was the most popular tigress among tourists. She was born to T 7, popularly known as Badimada and T 1, known as Charger in 2005. In 2008, a team of experts from Dehradun fitted a radio collar on her. She lived in the wild for more than 16 years which is also a record.

According to Aniruddha Majumder, a scientist at state forest research institute, Jabalpur, her “legacy is not limited to Pench as her female cub was shifted to Panna Tiger Reserve who gave birth to five cubs and contributed a lot in the success of the relocation project of tigers in Panna Tiger Reserve.”

Another coal mine disaster has hit the headlines. Recently, at least six people were killed and many are feared trapped as three abandoned coal mines collapsed during illegal mining in Jharkhand’s Dhanbad district.

According to Prem Kumar Tiwari, the sub-divisional magistrate of Dhanbad, the rescue team recovered three bodies of women and one of a girl from Gopinathpur Open Cast Project of Eastern Coalfield Limited in Nirsa police station area.

Jharkhand Chief Minister Hemant Soren tweeted the incident and paid his condolences “to the departed souls”.

Jharkhand Chief Minister Hemant Soren tweeted the incident and paid his condolences “to the departed souls”.

Former  Covid has again struck the Indian cricket contingent. Seven members, including four players, of the team under quarantine in Ahmedabad ahead of the ODI series against West Indies have tested positive.

BCCI said that if the virus spreads further in the bio-bubble, the start of the six-match limited-overs series could be pushed back.

Official communiqué said that the BCCI medical team is monitoring the situation. It said that if the virus spreads further in the bio-bubble, the start of the six-match limited-overs series – the first ODI is on February 6 – could be pushed back.

Lt Gen Manoj Pande  has taken over as the new Vice-Chief of Army Staff. He has 39 years of distinguished service behind him, in which he has held challenging operational commands, including command of an Engineer Brigade of Strike Corps in the Western Theatre, Infantry Brigade along Line of Control in Jammu and Kashmir, Mountain Division in the High Altitude Area of Western Ladakh, a Corps in the North East, Commander-in-Chief Andaman & Nicobar Command (CINCAN) and General Officer Commanding-in-Chief of Eastern Command.

Just before the opening ceremony of the Winter Olympic Games in Beijing India announced a diplomatic boycott of the Games. According to the Ministry of External Affairs, no Indian official will be present at the opening or closing ceremonies. The Games, which were inaugurated on February 4, run till February 20. Only one athlete from India, skier Arif Khan, is taking part. He featured in the opening ceremony, though.

India’s decision came after China chose a PLA commander as one of the participants of the traditional torch relay. The commander was involved in the June 15, 2020 clash in Galwan Valley. He was subsequently given military honours by Beijing. The MEA has said that the commander’s participation in the torch relay was “regrettable”.

The USA has also observed a diplomatic boycott of the Games, though for other reasons.