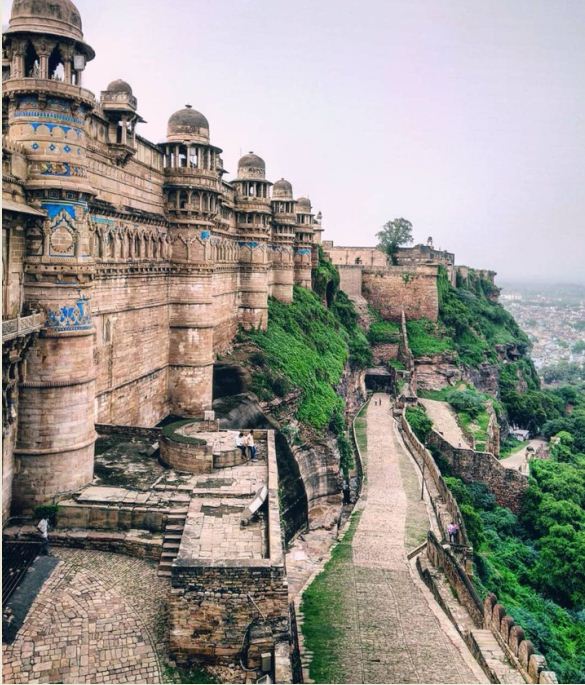 Madhya Pradesh is one of the most historic and scenic place of India. Its topography is unique, so are its people, its flora and fauna. Added to that is mystique and thrill of history as you hear stories of the days when dacoits infested the Chambal ravines. This is a place to go now.

Before we venture in, here are some travel regulations in the time of the Coronavirus.

Covid-19 Prevention Measures
-There would be no lockdown in MP
-No separate approval/e-pass will be required for interstate travel.
-All the ASI monuments and religious places will remain accessible to
travellers.
-Tourists may download Sarthak Lite App to avail COVID-19 related
medical assistance.
-For any tourism related assistance call 1800 233 7777
-For any query do call on MP State Helpline -104 or 1075

Madhya Pradesh, state of India. As its name implies Madhya means “central” and Pradesh means “region” or “state”. It is situated in the heart of the country. The state has no coastline and no international frontier. It is bounded by the states of Uttar Pradesh to the northeast, Chhattisgarh to the southeast, Maharashtra to the south, Gujarat to the southwest, and Rajasthan to the northwest. The capital is Bhopal.

Madhya Pradesh’s history dates back to the prehistoric times when life on planet Earth was still in its nascent phase. This region belongs to Gondwana land which was a part of super-continent called Pangea – which existed about 300 million years ago.

ALSO READ ! A place in the hills, of god and peace

Pre-Historic Era: In the pre-historic times, this region was inhabited by the primitive people. Fossils, pre-historic paintings, and sculptures are the evidence of their presence in the region.

Various paintings can be seen on the walls of ancient caves and rocks. Caves near Hoshangabad, Bhimbetka.

Chalcolithic Culture: The early civilization used copper and stone. It flourished around 2000 BCE in the valley of Narmada. This civilization was contemporary to the Harrapan civilization.

Aryans: The arrival of Aryans marked a change in the history of civilization of India and Madhya Pradesh too. They resided mostly in the Malwa plateau. Malwa has been ruled by many rulers from time to time in history. With roots in the Neolithic period, Malwa was established as one of the first powerful empires in the region, ‘Avanti’.

Mauryan Empire: Around 320 BCE Chandragupta Maurya united north India and established the Mauryan Empire. The rock edicts of Ashoka have also been discovered from many parts of Madhya Pradesh.

Post Mauryan: After the decline of Mauryan dynasty, Sungas and Satvahanas ruled Madhya Pradesh. Till 100 BCE the Satvahanas ruled the region. During this time Shakas and Kushanas also ruled here.

Sunga: Pushyamitra Sunga overthrew Mauryans and became the new king of Magadha. His empire extended to the Narmada and included Patliputra, Ayodhya, Vidisha. Merutunga incorporated Avanti into the dominions of Pushyamitra.

Gupta Period: In the 4th century CE, Samudragupta emerged as a great power in Central India.

Hunas: After the decline of Guptas, many rulers attacked the region and ruled for some time. Hunas were one of them. Around 530 CE Yashodharma, son of Toramana, defeated the Hunas and ruled the region till late 5th Century.

Rashtrakutas: In the 7th Century after the rule of various small empires like Mahismati, the Rashtrakutas came to the power. Their capital was Vidharba and they further conquered Malwa.

Chandela: The temples of Khajuraho were built by the rulers of Chandela Dynasty between 900 and 1130 CE.

Madhya Pradesh witnessed rise and downfalls of various empires from time to time. It has always been a perfect place for any kingdom to flourish. Chandelas and some few small rulers were last one to rule the Madhya Pradesh in the Ancient period of history.

The sultanate of Malwa was founded by Dilawar Khan Ghuri, the governor of Malwa for the Delhi Sultanate, who asserted his independence in 1392. Most of Madhya Pradesh came under Mughal rule during the reign of Emperor Akbar (1556–1605). After the death of the Mughal emperor Aurangzeb in 1707, Mughal control began to weaken, and the Marathas began to expand from their base in central Maharashtra.

In the 18th century, the Maratha Empire began to expand and gained large amounts of territory. The Battle of Bhopal was fought in Bhopal in 1737, where the Marathas defeated the Mughal forces. Large tracts of land in Malwa were ceded to the Marathas.

The Shindes (Scindia) of Gwalior ruled most of Gird region; the Holkars of Indore ruled much of Malwa.

British Colonial period (1858-1947) and after Independence: British dominion extended to Madhya Pradesh with the fall of Marathas and most of its regions became princely states of British India. After independence, it attained the true stature of an Indian state in 1956.

The states of Madhya Bharat, Vindhya Pradesh and Bhopal were incorporated into the state and the southern region of Vidarbha was conceded to the Bombay state. It emerged as the largest state in India, with Bhopal as the capital. In November 2000, the present day Madhya Pradesh came into being, when the south-eastern region of the state was carved out to form the new state of Chhattisgarh.

Chambal: The area of Chambal lies between three states of India, namely Madhya Pradesh, Rajasthan and Uttar Pradesh, and is thus named due to the river that flows by:  the Chambal river. The call of the Behad retained a stronghold on peoples’ imagination and the Baghi continued to be seen as a victim of the system, a person of honour who had taken up arms as a last recourse against an unjust and unfair enemy. The Baghis’ survival depended on the sympathy and complicit support of the local population. The emergence of organized gangs, caste based vendettas and kidnapping for ransom led to an erosion of this support base.

The Baghi lost the high moral ground and became more of a common thug, losing his place of honour in local folklore. The late 20th century saw several rehabilitation programmes combined with relentless law enforcement. Appeals to surrender by the social activist Vinobha Bhave and by Jayprakash Narayan yielded results and the 1970’s saw mass surrenders by former dacoits.

Bhimbetka
Cave paintings dating back to approximately 30,000 years. Rock shelters that were home to humans, millennia ago. And a rich flora and fauna surrounding these, indeed, make Bhimbetka a gift to us from our earliest ancestors. The Bhimbetka Rock Shelter has the oldest-known rock art in India, as well as is one of the largest prehistoric complexes to be seen. An archaeological treasure, Bhimbetka has around 243 rock shelters.

Khajuraho
Khajuraho is an ancient city known for magnificent temples and its intricate sculptures located in the Chhatarpur district of Madhya Pradesh. The splendour of the intricate statues is one of the reasons that make it a popular site to visit among tourists. Built between 950-1050 AD by the Chandela Dynasty.

Orchha
The historic town of Orchha, nestled on the banks of river Betwa, was founded in the 16th century by the Bundela Rajput Chief, Rudra Pratap. Here, the river Betwa splits into seven channels, also called the Satdhara. Legend goes that this is in honour of the seven erstwhile Chiefs of Orchha.

Sanchi
The Stupas of Sanchi were constructed on the orders of Emperor Ashoka to preserve and spread the Buddhist philosophy. Sanchi has been protecting these beautiful and sacred architectural wonders, just the way these wonders have been safeguarding ancient history and art of the Mauryan period. The numerous stupas, temples, monasteries and an Ashokan pillar have been the focus of interest and awe for global audiences as well. In fact, UNESCO has given the status of ‘World Heritage Site’ to the Mahastupa.

Hunting ground to leopards and wild dogs, Kanha National Park, Madhya Pradesh also shelters over 350 species of birds and 1000-plus species of flora.

Ancient City Ujjain
This city is considered the Greenwich of India, with the first meridian of longitude passing through it. Known as the temple city for its numerous temples from different eras, and the major attraction is Mahakaleshwar Jyotirlinga. It is one of the 12 jyotirlingas, where Bhasma Aarti is a daily ritual that you must attend. In order to attend the aarti, make sure to follow the dress code if you wish to go inside the sanctum and participate in Abhishek.

Chitrakoot
Known as the ‘Place of Many Wonders’, Chitrakoot nestles in the northern Vindhya range of mountains and has enchanting places to visit. Chitrakoot mountain range includes Kamad Giri, Hanuman Dhara, Janki Kund, Lakshman pahari, and Devangana which are famous religious mountains. It is believed to have got its name owing to the presence of ‘Cheetal’ (deer) in the region.

The city is known to be of great religious and connection with Ramayanya. According to folklore, Lord Ram and Sita spent eleven of their fourteen years of exile in the deep jungles of Chitrakoot.

Amarkantak
It is a well frequented Hindu pilgrimage centre that is popularly known as “Teerthraj” – “the king of pilgrimages”. It is the meeting point of the Vindhya and the Satpura Ranges, with the Maikal Hills being the fulcrum. Three rivers – the holy Narmada, the Sone and the Johila emerge here from the womb of Amarkantak.

Gwalior Fort
The Gwalior Fort is considered one of the gems of Indian forts. It is also known as one of the most colourful forts in India because of its intricate craftsmanship of turquoise tiling with a hint of glistening yellow.

Jahaz Mahal, Mandu
The architecture of Jahaz Mahal best captures the medieval royal romance of Rani Roopmati & Baz Bahadur.  Another tale has it that the mahal was built by Ghiyas-ud-din to serve it as a harem for 15,000 women of his court.

Dhuandhar waterfalls, Jabalpur
The waterfall has been named so because of the smoky appearance of the water falling off the cliff with utmost force.

Kapildhara waterfalls, Amarkantak
The holy waters of river Narmada plunge from a height and look beautiful. This is one of the most popular spots here to plan an outing with your family and friends. You will feel instantly rejuvenated by seeing the beauty around.

CUISINE
The state of Madhya Pradesh is known as the heart of India, not just because of its geographical location, but also because of its rich culture and history, as well as a vibrant cuisine.

Poha Jalebi
Poha Jalebi is the favoured breakfast dish of MP and is even famous in a lot of other North Indian states. Tangy poha topped with namkeen accompanied by crispy sweet jalebis are the perfect way to start your day.

Bhuttey Ke Kees
This dish is only made in Madhya Pradesh and is a healthy and yummy food that is made with grated corn kernels cooked in spices, coconut and skimmed milk. Mustard seeds and green chillies are added to up the spice factor of the dish.

Bhopali Gosht Korma
The dish is part of the something called the Nawabi cuisine and it’s made by slow cooking mutton chunks in a rich and spicy gravy. The result is a melt-in-the-mouth mutton dish that is fit of feasts of the very special kind.

Rogan Josh
Rogan josh is an aromatic lamb dish of Persian origin, which is one of the signature recipes of Kashmiri cuisine, but Bhopalis also have quite the preference for it, so much so that, it has become one of the best places to get a plate of spicy rogan josh.

Indori Namkeen
Ratlami sev are one of the most known regional namkeen in India.