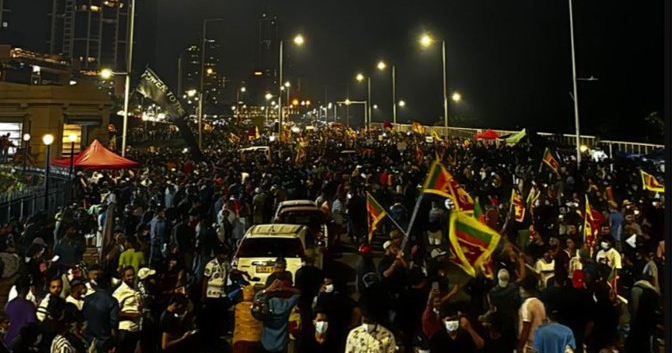 The government of the country called the move a move of “last resort”, as the country ran out of foreign exchange to pay off the debt instalment and to pay for the import goods that the country desperately needs.

This is the island nation’s worst economic downturn since independence. However, default shows a way out. Countries that default can often borrow again quickly, but defaults can inflict severe economic costs in the short run. This is primarily because the country’s sovereign credit rating would have plummeted, making borrowing extremely costly. Hence the entire country has now to go through years of severe austerity, controlled by whichever loan issuer has the say.

At this point it is not just a default on its obligations that haunts the country. there is a severe shortage of fuel, even food, coupled with 12-15 hours of power outages that have crippled industry and even households, amid this searing summer heat.

Sri Lanka’s finance ministry said in a statement that creditors, including foreign governments, were free to capitalise any interest payments due to them from Tuesday or opt for payback in Sri Lankan rupees. “The government is taking the emergency measure only as a last resort in order to prevent further deterioration of the republic’s financial position,” the statement said.

It added that the immediate debt default was to ensure “fair and equitable treatment of all creditors” ahead of an International Monetary Fund assisted recovery programme for the South Asian nation.

Almost the entire country – it has a population of 22 million – is now up in arms, but President Gotabaya Rajapaksa has refused to quit, though the entire cabinet has.

A TIMELINE OF THE CRISIS

Pandemic in 2020
While the sweeping tax cuts announced by Rajapaksa caused a credit rating downgrade in 2020, it was the Covid-19 pandemic in March that year which made matters worse for the island nation.

The tourism industry went into major losses and the credit ratings agencies moved to downgrade Sri Lanka and locked it out of international capital markets. The country also witnessed a steep decline in the exports of tea and rubber due to lower demand.

As a result Sri Lanka GDP declined by 3.5 per cent, the Current Account Deficit came down to 7.9 percent of GDP, and the fiscal deficit reached to 11.1 percent.

April 2021
On April 29 last year, the Lankan government banned the import of chemical fertilisers and other agrochemicals in an attempt to make the country the first in the world to practice “organic-only” agriculture. While the move was aimed at reducing pressure on forex reserves, the experts criticised it, terming it “unscientific” and saying that such drastic policy shift would lead to a steep drop in yield.

Rajapaksa, however, claimed that the decision would help save around $200 million incurred on importing agrochemicals. November 2021 By November, it became clear that the decision had backfired and there was a drop in the agricultural output. The government, facing protests, then said that it would lift the ban partially.

The recovery, however, from the damage already done, was not easy. In a report published by The Week, Saman Dharmakeerthi, professor of soil fertility and plant nutrition at the University of Peradeniya in Kandy, said that the ban led to a reduction in yield, which went down by 25 per cent. Tea cultivation, which is one of the mainstays of the economy, was also badly hit. The output of pepper, cinnamon and vegetables went down by 30 per cent, Firstpost reported. The immediate result of this was that the country became more dependent on foreign countries for rice and other staples.

March 2022
By the end of March this year, due to lack of critical foreign currency, the situation became so severe that the country failed to pay for vital imports, leading to shortages in everything from life-saving medicines to cement. As a result, the government announced nationwide 13-hour daily power cuts.

The foreign exchange reserves stood at a paltry $2.31 billion and the country struggled to pay for critical imports including fuel, food and medicines. The government said it will approach the International Monetary Fund (IMF) on a plan to help as a foreign exchange shortage has squeezed essential imports amid looming debt payments.

April 5
Sri Lanka announced that the overall rate of inflation for February 2022 stood at 17.5 per cent, the highest since 2015. The immediate ripple effect of inflation was witnessed as Sri Lanka posted soldiers at hundreds of state-run gas stations to help distribute fuel after a sudden rise in prices of key commodities and accompanying shortages forced tens of thousands of people to queue for hours.