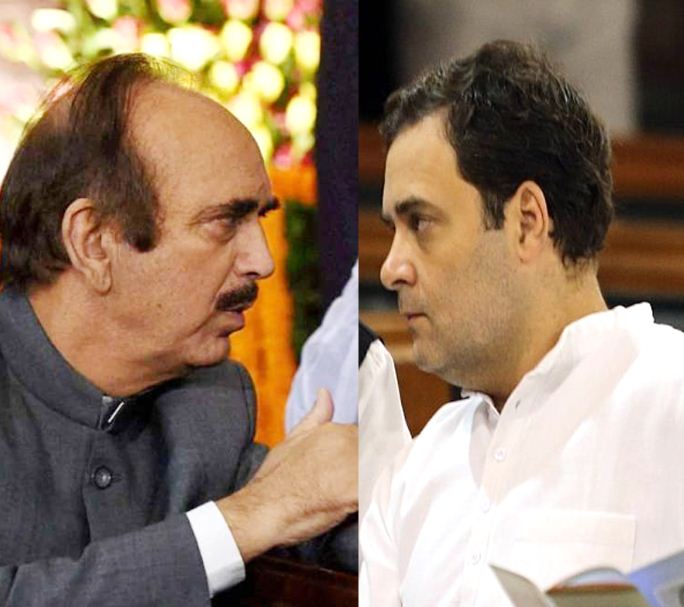 The resignation of Jammu and Kashmir leader Ghulam Nabi Azad from the primary membership after he quit other committee posts will not bring the Indian National Congress (INC) down by itself. So many leaders have quit in the recent past that the existing party leadership has almost come to see such action as de rigueur. What is happening, however, is that the credibility of the 100-plus-year-old party is diminishing with every strike.

The basis of a political party is not just astute opportunism. It is based on history and, more importantly, an ideology, however flimsy. To that extent the INC has both in bundles on its side. To be very specific and fair, there are arguments on both sides of the breach. A study of the allegations Azad has made in his five-page letter to Congress interim president Sonia Gandhi and the rebuttals thereafter can throw a lot of light on the issues that need quick repair.

Before getting into that one has to be reminded that Azad’s Rajya Sabha term has ended and he has not received a further nomination to the Upper House from his (erstwhile) party.

Now consider the initial stages of the letter, where Azad has enumerated the various positions he has held in the past in the party. This is impressive (all from Azad’s letter):

If that is not impressive, what is? Therefore it is pertinent to presume that the party, on multiple occasions in the past, has rewarded (for his loyalty to the Nehru-Gandhi family and whatever else) Azad with plum posts.

Of competency
That also proves that he is competent enough to handle such complex assignments. He could not have, overnight, lost his acumen.

At the same time, is Ghulam Nabi Azad a man who can win elections, catch votes for his party? That has yet to be proven.

Here are some more accolades:

So when people like the party’s media department head, Pawan Khera, lashed out at Azad and linked his resignation to end of his Rajya Sabha tenure, there could have been some truth in it. Khera said: “As soon your Rajya Sabha term got over, you got restless. You could not stay without a post even for a second…”

Congress general secretary in-charge of communications Jairam Ramesh was harsh. He tweeted: “A man who has been treated with the greatest respect by the Congress leadership has betrayed it by his vicious personal attacks which reveals his true character. GNA’s DNA has been Modi-fied.”

How much of that is conjecture is a matter of a wild guess, but possibly Azad deserved more decent language. Or did he? This is because the language Azad himself used in his letter, especially against the Prince in the party, Rahul Gandhdi, has not been too polite either.

Here are some portions of the letter, reproduced for elucidation of the point.

“…after the entry of Shri Rahul Gandhi into politics and particularly after January, 2013 when he was appointed as Vice President by you (Sonia Gandhi), the entire Consultative mechanism which existed earlier was demolished by him. All senior and experienced leaders were sidelined and new coterie of inexperienced sycophants started running the affairs of the Party.”

That sounds a bit like sour-grapes to the reader. Then there is this, almost damning part:

“One of the most glaring examples of this immaturity was the tearing up of a government ordinance in the full glare of the media by Shri Rahul Gandhi. The said ordinance was incubated in the Congress Core Group and subsequently unanimously approved by the Union Cabinet presided over by the Prime Minister of India and duly approved even by the President of India. This ‘childish’ behaviour completely subverted the authority of the Prime Minister and Government of India. This one single action more than anything else contributed significantly to the defeat of the UPA Government in 2014 that was at the receiving end of a campaign of calumny and insinuation from a combination of the forces of the right wing and certain unscrupulous corporate interests.”

Decency
“Immaturity” doesn’t cross the line of decency, but “childish”, probably, does. After all, you are addressing the uncrowned prince. Then, there is this insinuation:

“In fact in January of 2013 at Jaipur, I had proposed with the assistance of others members of the Committee (the CWC) a detailed action plan to revitalize the party in the run up to the 2014 Lok Sabha elections. That action plan (was) duly approved by the CWC.

“These recommendations were supposed to be implemented in a time bound manner before 2014 Lok Sabha elections. Unfortunately, these recommendations are lying in the storeroom of the AICC for the past 9 years. Inspite (sic) of my repeated reminders in person both to you and the then Vice President Shri Rahul Gandhi from 2013 onwards to implement these recommendation’s. However, no effort was made to even examine them seriously.”

Well, that is a serious enough allegation from a CWC member. But this is the Congress gene, to disregard all recommendations from junior party members – incidentally, that means those who were not Gandhis or not very close to the Gandhis – till some disaster takes them right back to square one. That is when the blame game starts. A recent experience with poll strategist Prashant Kishor’s detailed suggestions is a good example of how the body politic refuses to listen to logic. So what was Azad expecting, or what is he expecting now?

Jairam Ramesh’s allegation may have some meat attached, but remember the earlier assessment of Azad: he is not an election winner, or a vote catcher. There have been wild assumptions that the BJP might want to use him as a chief ministerial figurehead for the J&K polls. It is not impossible, but, at this point, sounds improbable.

Own party
What has happened, though, as of the time of writing this, is that Azad’s aide has announced that Azad is in the process of floating his own all-India party. What he plans to do with that is not clear. How many people will come over to his party in support, or will be able to draw any section of the electorate with him, or if he wishes to use this leverage to strike a deal with the BJP is not clear. It will be clear in 14 days, his aide said.

The bigger picture
The issue gathers moss when this resignation is seen with the backdrop of other similar resignations in the recent past. Anand Sharma resigned from a party post, but as of writing this, he remains ensconced in the party as a whole. Probably he is holding out for ‘some more’.

Yes, the Congress party is a private fiefdom of the Gandhis. That is a fact. And it is also a fact that the intransigence of Rahul Gandhi makes it sound even less of a myth. His disregard to authority – his tearing up of the document in full view of all is certainly one of those – and his inability to take up responsible positions in the party which call for accountability is definitely not adorable.

Think of the Bharat Jodo Yatra planned by Rahul. It seemed a good idea, till it was apparent that the entire family would be travelling abroad, with Rahul returning just a couple of days before the yatra to make a nominal appearance. Also, the intervening CWC meeting will be virtual, the Gandhis dictating work from far away.

In the face of nearly 40 assembly election losses and a thin presence in the Lok Sabha, this does not sound like a serious, 24×7 politician in the mould of a Narendra Modi.

Hence, to win elections, a united front under a strong leader is essential. The current electorate is young, very young. That is why local leaders are able to sway their voters better. You need to be close to the people who you want to vote for you. You need to at least show that you are working hard. Remember, foreign tours in a country as poor as India are seen as a sign of preoccupation of the rich.

Conclusion
Surely the Azad resignation is a big blow, but it is not the end of the road for Congress. With timely and astute reorganisation and fresh optics, the party can still make a decent meal of the country’s electorate. If it wants to, that is. The announcement that the party’s election to the post of president will be held on October 17 is good news (see box). We will wait for that.

List of Congress leaders who resigned from party recently
with the exit of veteran leader Ghulam Nabi Azad from the Congress, months before the upcoming Gujarat and Himachal Pradesh Assembly polls, as well as the general elections in two years’ time, will have a huge blow to the grand old party.

Not only Azad but several high-profile leaders have quit Congress this year making it difficult for the party to find its feet in the upcoming polls.

At a time when the Congress is gearing up for its ‘Bharat Jodo yatra’, a 148-day march from Kanyakumari on September 7 under the leadership of party leader Rahul Gandhi, will culminate in Kashmir, with an aim to reunite the nation, the party is struggling to keep its own leaders tact.

Let’s take a look back at some of the recent big exits from Congress.
Jaiveer Shergill
Jaiveer Shergill, who is a lawyer by profession and was one of the prominent ones among young Congress leaders, on August 24, tendered his resignation claiming that the vision of the decision-makers no longer was in sync with the aspirations of the youth.

Kapil Sibal
Earlier this year in May, senior Congress leader Kapil Sibal, a prominent face of the G-23 group of dissenting leaders, gave another blow to the party after he resigned from the party and filed nomination papers for the Rajya Sabha elections as an independent candidate backed by the Samajwadi Party (SP) earlier this year.

Sunil Jakhar
Former Punjab Congress chief Sunil Jakhar too parted ways with the Congress in May this year.

RPN Singh
RPN Singh, who was named as a star campaigner for Uttar Pradesh Assembly elections, quit the party when the Congress was preparing to win the battle against BJP in Uttar Pradesh.

Ashwani Kumar
Former Union Law Minister Ashwani Kumar in February resigned from Congress after a long association of 46 years with the party.

Hardik Patel
Back in May, Gujarat Patidar leader Hardik Patel in resigned from the grand old party after he felt that he was being “ignored”.

Pema Khandu—who had earlier won assembly elections in Arunachal Pradesh on a Congress ticket—joined the BJP in 2016 and became the state CM.

Jyotiraditya Scindia, a senior Madhya Pradesh Congress leader, had quit the party in 2020. He is now a Cabinet Minister in the Modi government.

Veteran Congress leader Himanta Biswa Sarma had left in 2015 and is now serving as the chief minister of Assam.

Congress MLA N Biren Singh had joined the BJP in 2016 and became the Manipur CM in 2017.