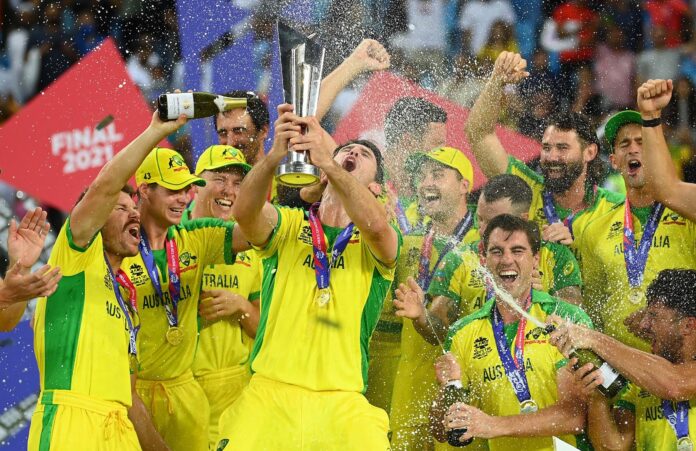 Australia won their maiden T20 World Cup, beating Tasman rivals New Zealand by eight wickets at the Dubai International Stadium on Sunday. That puts Australia in an enviable position of a team having won all ICC trophies.

As has been the tradition of this World Cup, Australia won the toss and elected to field. New Zealand managed 172 for four in their 20 overs, despite captain Kane Williamson’s explosive 85, scored in just 48 deliveries. His innings almost made it change the trend of run-chasers in generally wining the game in this series. The problem was that the skipper was left fighting almost alone, without much support from the team.

Batsman Guptill scored 28 off 35 deliveries, but his innings was more sedate and did not seem he was playing in a T20 match.

Of the Australian bowlers, Josh Hazlewood took three wickets for 16 with Adam Zampa taking another for 26.

Again, going by the trend of this series, chasing a 173-target wasn’t an easy affair. But, second time this week, the team from Down Under chased down a 170-plus
target, specifically on the shoulders of a 92-run partnership between David Warner (53 off 38 deliveries) and Mitchell Marsh (77 off 50).

As Glenn Maxwell arrived, things were pretty much settled Australia’s way. Maxwell’s 28 off 18 finally pushed the Aussies to the winning target of 173 with an over, plus a delivery to spare.
Kiwi bowlers failed to live up to the reputation that had earned in this series. Trent Boult took 2 for 18.