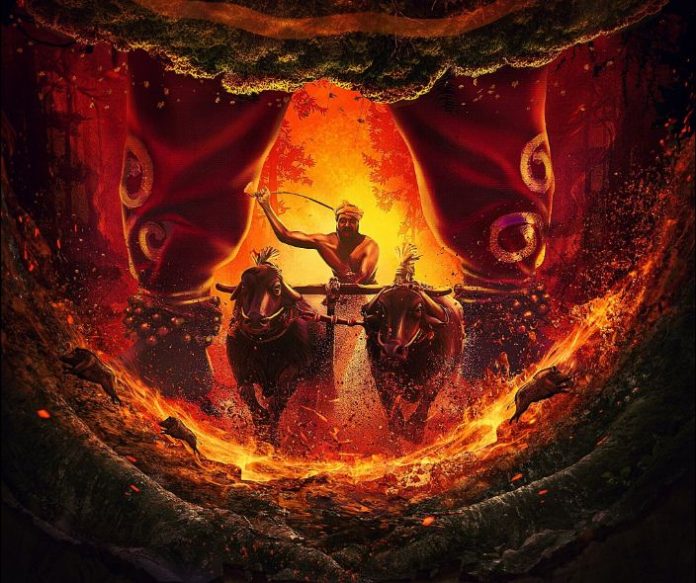 Kantara is an adventure drama thriller written and directed by Rishab Shetty. The movie casts Rishab Shetty and Sapthami Gowda in the lead roles along with Kishore, Achuth Kumar, Pramod Shetty, Vinay Biddappa and many others seen in supporting roles.

The music was composed by B Ajaneesh Loknath while the cinematography was done by Arvind S Kashyap and it is edited by Pratheek Shetty, K M Prakash. The film is produced by Vijay Kiragandur under Hombale Films banner.

The story began in 1847 when the king of a village in coastal Karnataka donated a huge parcel of land to villagers in exchange of an idol of the local deity, Panjuri, for lasting happiness and peace. During the exchange, however, he was warned by the spirits of the forest that if the king ever asked for this land back, the gods would not forgive him.

Cut to 1970, a descendant of the king wants to take the land back. During an annual ritual of Bhoot Kola (a local worship), the descendant meets a local dancer possessed by the deity and asks him for the land. Angered by his insolence, the deity who entered the dancer’s body disappears into the forest. After a few days, the descendant dies mysteriously.

Depicting Supreme God Vishnu’s third incarnation on earth called Varaha avatar. The forest tribal community is devoted to Varaha and considers bhootakola(divine dance of coastal kannada) performer to rudra demigod(Lord Shiva) who is gatekeeper of the community and protects every devotee of Lord Varaha from evil spirits(living/dead).

A promise of ancestors is under threat to be breached by people over lust for materialistic gains where the ancient king had made a deal with demigods as a bargain for his peace. With such a powerful storyline, excellent performance by every actor, keeping a raw background showing beautiful traditional practices of coastal Karnataka in an ultimate showdown of good vs evil.

Kantara is a vast, mysterious forest, In Kantara, the forest plays a significant role. People in the town live as children of the forest, blending with it on one side. However, the Forest Officer has decided to protect the forest diligently. This is so that not a single piece of wood will be removed from it and no one will encroach upon it. Also included are the misdeeds of Devendra (Achyut), a lusty politician.

Shiva (Rishabh) always fights for the village, and Muralidhar (Kishore), who says that the law applies to everyone, is not one to stand up to anyone. A key theme of Kantara is the encroachment of forest land, looting of forest wealth, and conflict between forest officials and villagers.

Past meets present
It’s 1990 and another descendant of the king, the local landlord Devendra Suttur (played by Achyuth Kumar), has his eyes on that land. As the keeper of the village, Shiva (played by Rishabh Shetty), the winner of the buffalo-running game Kambala, has the task of saving the land. For it was his father who had disappeared in the forest as a deity. His mother is worried that Shiva will meet his father’s fate.

A new forest officer, Muralidhar (played by Kishore), enters the scene who wants to curb felling of trees in the region. This makes him unpopular among the villagers. Shiva’s girlfriend, Leela (played by Saptami Gowda), is a forest guard and is part of Muralidhar’s team.

Reviews
Set in a fictional village of Dakshina Kannada, Kantara brings alive the traditional culture of Kambla and Bhootha Kola. It is believed that Demigods are the guardians and their energies encircle the village. In the story, there is a ripple when a battle of ego swirls among the traditions and culture of the land. In a conflict between humanity and nature, Shiva is in rebellion and working against the latter. He engages in intense conflicts leading up to a war between the villagers and evil forces.

Blend of dance and action
Kantara scores with its action sequences, starting with an exhilarating Kambala race. Rishabh shines in the slow-mo bull race sequence. Blending classical dance forms with blood-spilling action, stunt choreographer Vikram More also helps build the climax, keeping one on the edge of the seat. Arvind Kashyap’s cinematography effectively captures it all.

A lot of screen time is devoted to the performance of the Bhoot Kola, an annual ritual worship of the deity. The background score by Ajaneesh Loknath heightens the myths and legends of the land.

Caste politics
The film explores the deep-rooted caste hegemony in southern Karnataka. The upper caste landlord Devendra appropriates the land of unsuspecting tribals, depriving them of their rights. He does not allow locals to set foot in his home. When Shiva breaches that rule, Devendra purifies his residence. Kantara also tries to make the point that tribal traditions need to thrive and prosper.

Performance
Rishabh Shetty as Shiva puts in a memorable performance as the man who would go to any lengths to protect his village. He is a maverick, who would rather spend his time lazing around with friends, indulging in gluttony. But if someone dares raise a finger at his folks, there is no stopping his ruthless rage.

Kishore as Muralidhar, on the other end of the spectrum, is an upright government officer, committed to his duty. Kishore plays this part with poise. Achyuth Kumar as the casteist and greedy landlord is cunning and manipulative.

Production
Director Rishab Shetty cited the conflict between nature and human beings as the theme of the film, while adding specifically that the strife between forest officers and the inhabitants in his hometown Keradi, Karnataka, in the 1990s, as the source of inspiration for the film. He further added, “It is a film from our land, from our roots, stories that are heard through generations, untapped and deeply rooted to our culture.” Shetty conceived the story in 2021 during the COVID-19 lockdown.

Elaborating on the title of the film, he said, “Kantara is a mysterious forest and this is a story that happens around the area..The film title has a tagline calling it a dhanta kathe or a legend. I did not want to give the film a straight or direct title. The word is not used often. While it has Sanskrit origins, it is used in Kannada too. It is used in Yakshagana too, where we call a very mysterious forest Kantara.

Budget
Kantara has been made on an overall budget of Rs 16 Crores.
Production Budget: 13 Crores Prints & Advertising Costs: 3 crores.

The movie was estimated to have earned around Rs 24.8 crore  in 5 days. Rs 8.7 crore on its sixth day. The estimated first week gross earning was reported to be around Rs 45.5 crore.

The movie reportedly collected Rs 4.3 crores on its 11th day – which was the highest for a Kannada movie on second Monday. The movie grossed Rs 57.11 crore in 11 days.

The movie grossed Rs 60 crore  in less than 2 weeks. The movie was reported to have higher domestic net collections than both Ponniyin Selvan: I and Godfather. Kantara also earned more than those movies in Karnataka.

The movie was reported to have crossed the Rs 100 crore mark within 15 days to 17 days.