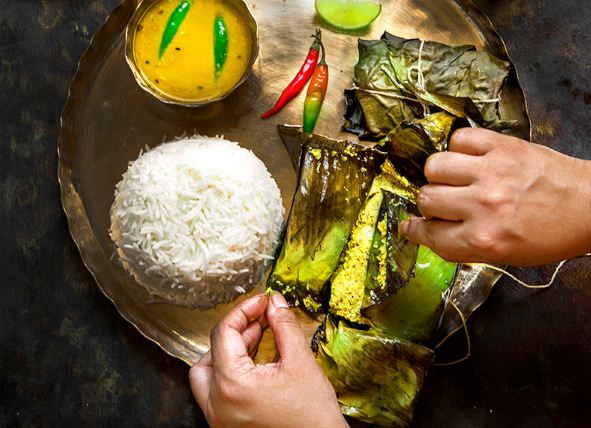 Bhetki macher paturi is a traditional Bengali fish preparation which has been enjoyed by all, beyond age and time. Bhetki paturi always calls for good quality freshest possible barramundi fillet, which is marinated in mustard based mixture and wrapped in banana leaves. Fish is cooked either by steaming or grilling on a pan and enjoyed with steamed rice, always.

This unique style of Bengali cooking includes using banana leaves for cooking fish. Here, ‘bhetki’ is the Bengali name for the barramundi fish (maach). ‘Paturi’ stands for leaf. A Bhetki fish paturi recipe is prepared using this fish and banana leaves, along with a few other simple ingredients readily available in every Indian household.

Bhetki paturi, or more properly bhetki macher kolapaturi, is a relatively new entrant in the Calcutta food scene. Ilish was the de facto fish for kola paturi, until rising prices and the challenges of picking out fine bones at wedding buffets while also trying to maintain at least the pretence of friendly conversation led to boneless bhetki fillets replacing ilish in paturi for catered events.

The word paturi, according to food historian Pritha Sen, comes from the word “patri” meaning a tablet (not tablet like a pill, but tablet like a slab of stone)—referring to how paturi is cooked in a flat layer on low heat, often in a leaf parcel like in this recipe. However, not all paturis are cooked in leaf parcels.

The basic fish paturi marinade has just ground mustard, green chillies, turmeric, mustard oil and salt. The pungency of the mustard may be toned down with yoghurt (which also adds some sourness), or coconut (also adds texture and flavour), poppy seed paste, or by simply using more yellow mustard than brown.

One such iconic Bengali fish recipe is paturi. Etymologically, the word ‘paturi’ comes from ‘pata’, meaning leaf. In this recipe, banana leaf has the most important role to play. To put it simply, paturi is marinated fish, wrapped in banana leaf and steamed to perfection. Traditionally, bhetki fish is used to prepare this dish. But you can also go for basa, if bhetki is not available. During the monsoons, paturi is also made with the delicious hilsa fish.

Paturi recipe also finds several regional counterparts across communities. In Parsi cuisine, you get ‘patra ni macchi‘, Assamese refer to it as ‘bhapot diya mach‘; whereas, in Odia it is called ‘machcha patropoda‘. You also get a south Indian version of it, which is popularly known as ‘meen pollichathu‘. Interestingly, Laos (a country near Thailand) has a similar recipe called ‘mok pa‘. While the process of making these recipes remain the same, what makes each different from the other are the fishes and spices they use.

The fish fillets can be individually wrapped in small parcels or can be cooked all together, layered in a large leaf parcel either steamed or pan fried on low heat. You can also go out to the garden and cook the paturi on a clay oven over a coal fire. This gives the paturi an undertone of smokiness, which is great for a white, non-oily fish like bhetki.

The key of the well cooked yet melt-in-the-mouth kind of fish is double marination. First marinade would be a mixture of turmeric powder, salt and gondhoraj lebur ros, juice from king of lime which will not only soften the fish but also adds the aroma to the fish. Then marinate the same fish in paturi mix and keep for 30 minutes to 4 hours. This will bind the paturi flavour to the fish while the juice from the mixture will keep the fish soft and delicate. Substitute gondho lebu with regular lime or lemon if they are not available.