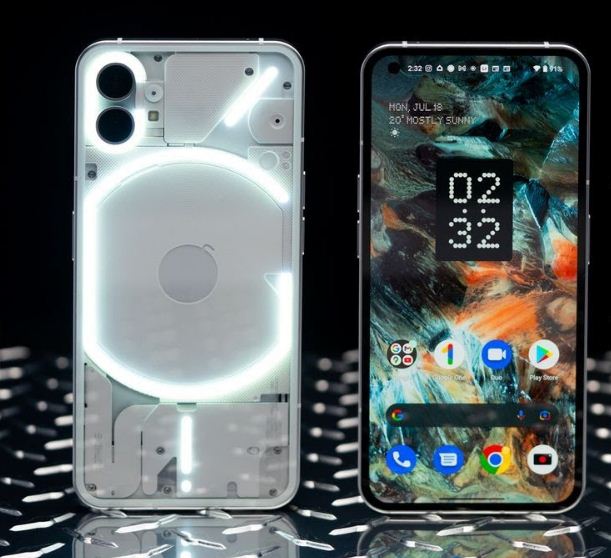 The name ‘Nothing’ actually means a lot today, in the world of smartphones.

Nothing is a fairly new company created by OnePlus co-founder Carl Pei. To do this, OnePlus has been integrated into Oppo and continues to create smartphones.

At first, Nothing started with the Ear in-ear headphones and then the smartphone appeared. More products may come in the future.
The Nothing phone not only has pleasant looks, but is also equipped with striking features. The mobile phone was launched in India on July 12, 2022 (officially) at a starting price of Rs 31,999.

This Nothing phone is powerful to the core as it lets you enjoy a breezy-smooth performance while accessing multiple apps since it is powered with Octa core (2.5 GHz, Single core, Kryo 670 + 2.4 GHz, Tri core, Kryo 670 + 1.8 GHz, Quad core, Kryo 670) Qualcomm Snapdragon 778G+. Moreover, the phone comes with 8 GB of RAM and 128 GB of internal storage, so you can store all your songs, videos, games, pictures and other stuff without worrying about space constraints.

Added to that, the Glyph Interface will have ten ringtones that will be accompanied by synchronized LED patterns. Users will also be able to connect certain light patterns with specific contacts. Apart from that, within the app, it is possible to change how notifications look so that the user knows what kind of message they just got.

Even though it might not seem interesting, this is an important step in the evolution of the notification LED. The Glyph Interface is bright enough to be used as a fill light when taking pictures or making videos. As a final touch, there is a small red LED that flashes while the camera is recording.

The camera specifications of the phone are very captivating. The Nothing Phone comes with a single camera setup on the rear which has 50 MP + 50 MP cameras so that you can capture portraits, landscapes, and more. Features on the rear camera setup include Digital Zoom, Auto Flash, Face detection, Touch to focus. On the front, the mobile features a 16 MP camera so that you can click some amazing selfies and do video chats.

Besides, the Nothing Phone runs Android v12 operating system and houses a decent 4500 mAh battery that lets you use it for hours on end while watching movies, listening to songs, playing games and doing other stuff without worrying about charging it frequently.

Various connectivity options on the Nothing Phone include WiFi – 802.11 a/b/g/n/ac/ax, Wi-Fi Direct, Mobile Hotspot, Bluetooth – v5.2, and 5G supported by device (network not rolled-out in India), 4G (supports Indian bands), 3G, 2G. Also, the handset is a treat to use as the sensors on the Nothing Phone include Accelerometer, Electronic Compass, Gyroscope, Ambient Light Sensor, Proximity Sensor, and SAR Sensor.

Features
The design: Eye catching and an absolute head-turner
There’s no way that anyone who sees Phone (1) will not look at least a few times. The back is not like anything you’ve seen before. The transparent back has over 400 components and has the Glyph interface looks great. There are 900 LEDs on the back and they are a lot of fun to see when a call comes or even when you are charging the phone.

The display: Looks bright and does the job well
The 6.55-inch OLED display is nice to look at. It is sufficiently bright and colours look punchy on the screen. Even in bright sunlight, legibility levels are quite satisfactory.

The processor: There might be scepticism over the Qualcomm Snapdragon 778G processor as it’s not ‘brand new’ but it is a performer in every sense. There are no lags or stutters and day-to-day tasks are an absolute breeze.

The battery: No charger but it works well
Nothing has not given a charger inside the box, but the phone offers up to 45W of fast charging. The battery works quite well as with medium to heavy usage, the phone can last a day.

The UI and software: A job well done
Full marks to Nothing for a refreshingly clean user interface. The Phone runs Nothing OS which brings absolutely no bloatware. Those who don’t like unnecessary apps will absolutely love the Nothing OS. It is easy to use and offers a lot of customisation options.