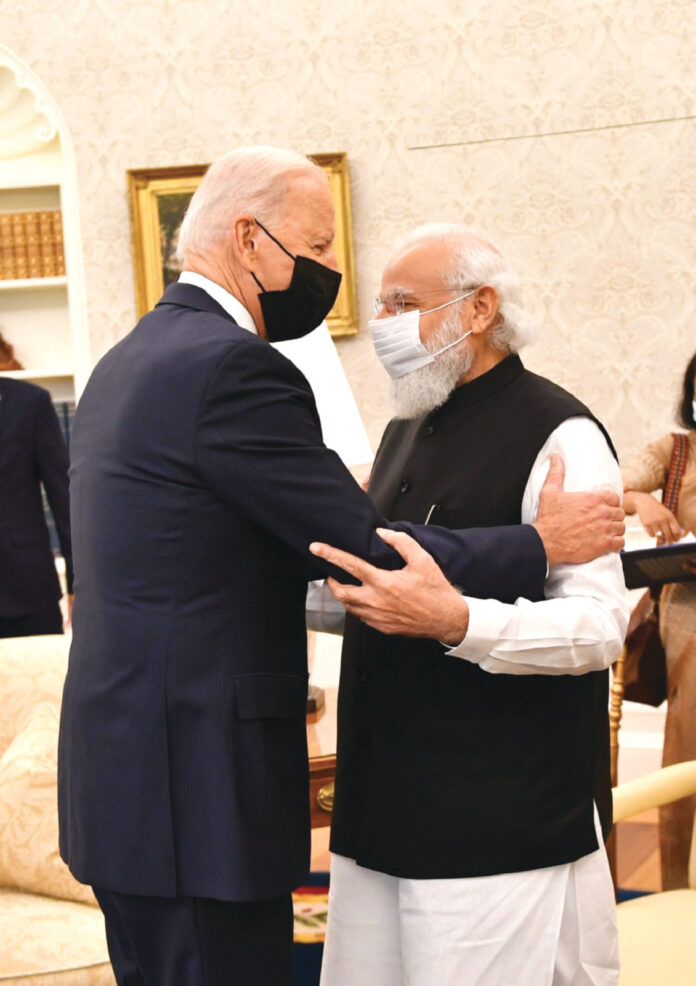 Prime Minister Narendra Modi’s four-day US visit was important for two principal reasons. He was to attend the Quad summit – the first physical summit after the Covid pandemic – and to address the UN General Assembly. This was Modi’s first foreign trip in two years. The overall issues were serious and required serious journalists, with years of experience in covering such crucial meetings to accompany the Prime Minister.
How many of such ‘serious’ journalists did take the free ride is not clear, but surely some who went deserved no place in the Prime Minister’s press party. Much of chest thumping of the Indian media has come undone, and this has made the country look ridiculous.
More importantly, this time the Prime Minister was visiting the country with a new line of leaders, including Joe Biden. Modi’s huge support of Donald Trump during his last visit has remained fresh in memory. Hence it had to be understood that the reaction of even Indian origin Vice-President Kamala Harris will be a trifle cold. Also, the pandemic this time prevented any large posse of Gujaratis and other BJP supporters making a trip to the US to coincide with Modi’s tour. Indian media accompanying the PM, therefore, found no “natural” jubilation on the streets of America.
Before his trip Modi had announced: “I will be visiting the USA from 22-25 September at the invitation of his Excellency US President Joe Biden. During my visit, I will review the India-US comprehensive global strategic partnership with President Biden and exchange views on regional and global issues of mutual interest.”
Off the main agenda, he also held meetings with CEOs of Qualcomm, Adobe, First Solar, General Atomic and Blackstone. He had meetings with Qualcomm CEO Cristiano R Amon, Adobe CEO Shantanu Narayen and discussed business pertaining to semiconductors and 5G technology. As for alternative energy, he met First Solar CEO Mark R. Widmar.
What these meetings will translate into only time will tell, but the no multinational moves into any country in a big way without factoring in world business sentiments, as well as the local business culture and atmosphere. Hence just one one-on-one meeting with the Prime Minister might be a trifle early to talk about investments flowing in.
Multinationals will also factor in how other multinationals, already present in the country, have fared. In that, the recent decision of Ford, one of the largest auto makers of the world, to completely shut down all manufacturing facilities in India will not come out as positive. India was once presumed to be one of the premier car manufacturing hubs of the world, but in the end, other than Suzuki Motors of Japan and Hyundai of South Korea (and to an extent Tata Motors of India), have managed any level of market share. Even Volkswagen of Germany has not been able to gain any good toehold in the market. Poor market reaction, specifically because of the high GST rates, was cited as Ford’s reason for pullout.
Hence, despite India’s stated objective to become one of the largest alternative energy countries will have to be weighed against the high levels of GST associated with each component that goes into the making of solar panels and other allied products. The country needs to look into its policies with urgency.
Politically, there may have been some brownie points scored, especially with the hard Indian repartee to Pakistan Prime Minster Imran Khan’s diatribe, but, at the same time, Turkey President Recep Tayyip Erdoğan’s bringing up the Kashmir issue (yet again), has not been a good sign.
Quad has been said to be developing into a potent force, specifically against China, but while its objectives are political and defence oriented, India would probably also need an economic angle to it, to pull India out of the current mess it has landed itself in.
Modi and Biden met for the first time since Biden became President in January 2021. Modi has been quoted as saying that Biden’s efforts on Covid-19, mitigating climate change and the Quad were noteworthy. “I would like to thank you for the warm welcome. I recall our interactions in 2014 and 2016. That time you had shared your vision for ties between India and the United States. I am glad to see you are working to realise this vision,” Modi said in his opening remarks. Later he said: “Had an outstanding meeting with Joe Biden. His leadership on critical global issues is commendable. We discussed how India and USA will further scale-up cooperation in different spheres and work together to overcome key challenges like COVID-19 and climate change.”