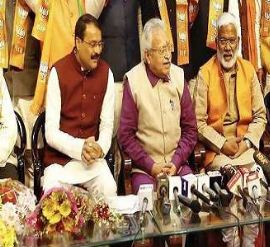 With state elections in full swing, and with the third phase of the Uttar Pradesh elections looming on February 20, the Samajwadi Party (SP) alliance against the Bharatiya Janata Party (BJP)-led NDA suffered a major jolt on February 15, when Apna Dal (Kameravadi) party state president Rajwan Singh Patel, along with his supporters joined the BJP.

Patel was welcome to the BJP fold by the party’s state president Swatantra Dev Singh, along with the former president of BJP and joining committee chief Laxmikant Bajpai. All this went on Lucknow, right under the nose of Akhilesh Yadav, the SP chief.

On his part, Rajwan Singh said that he believes in the leadership of Prime Minister Narendra Modi and the work done by the Yogi government has been visible on the ground. He said that this was what inspired him to join the party, campaign for it and strengthen the workers at the ground level.

The actual reason for this sudden move was not known, but this development makes it more difficult for the SP-AD(K) alliance, which is possibly only in name today.

Laxmikant Bajpai said that the “wave of the BJP” had already been seen in the first two phases. He insisted that the BJP would form its government in Uttar Pradesh by winning more than 300 seats.

Congress also loses
Also on the losing side was the Congress, as their MP from Bahraich, Kamal Kishor Commando’s daughter-in-law Priyanka Kishor also joined the BJP. Also former Janata Party MLA, Ashfaq and other leaders Rajesh Tiwari and Shikha Mishra also joined the saffron party. On Monday, Samajwadi Party leader Ayodhya Prasad Pal, who was a minister in the BSP government in UP, also joined the BJP along with his supporters. Pal was a four-time MLA from Fatehpur’s Ayah Shah Assembly constituency.