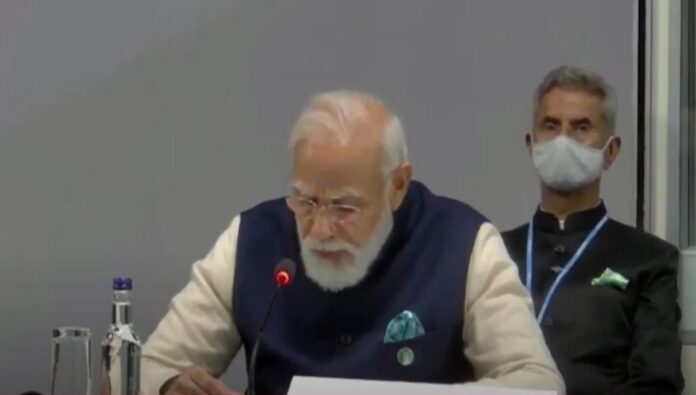 At the climate summit in Glasgow, called Conference of the Parties (COP) – its 26th summit, hence COP26 – India, led by Prime Minister Narendra Modi, on Monday pledged that it will achieve the target of net-zero carbon emissions by 2070.

The main points of agreement of the summit were as follows:

–      India will reduce the total projected carbon emissions by one billion tonnes from now to 2030.

–      India decides to include climate change adaptation policies in school syllabi to make the next generation aware of issues.

PM Modi said: “We have to make adaptation the main part of our development policies and schemes. In India, schemes like ‘Nal Se Jal’, Clean India Mission & Ujjawala have not only given adoption benefits to our citizens but also improved their quality of life.”

UN Secretary-General António Guterres said: “Our addiction to fossil fuels is pushing humanity to the brink. We face a stark choice: Either we stop it – or it stops us. It’s time to say: enough.”

US President Joe Biden said: “We want to do more to help developing countries accelerate the clean energy transition.”

Chinese President Xi Jinping, who is not attending in person, sent a message, urging developed countries to not only do more but also support developing nations to do better on climate change.

Bangladesh Prime Minister Sheikh Hasina askedtherich world leaders that they must fulfil both their own carbon emission cutting pledges and keep their promises to help developing countries de-carbonise.

Sonia Guajajara, head of the Articulation of Indigenous Peoples of Brazil (ABIP), said: “If there is no protection of indigenous territories and rights, there will also be no solution to the climate crisis, because we are part of that solution.”