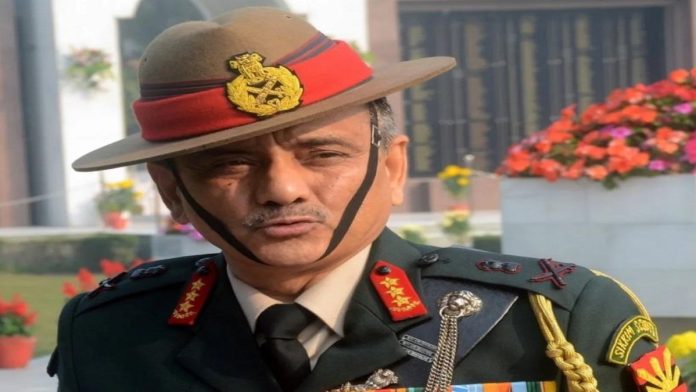 The Government on Wednesday, September 28, 2022, appointed former Eastern Army Commander Lt. General Anil Chauhan as the next Chief of Defence Staff (CDS). The post has been vacant since the death of the country’s first CDS Gen. Bipin Rawat in a helicopter crash in December 2021.

“The Government has decided to appoint Lt. Gen. Anil Chauhan (Retired) as the next Chief of Defence Staff (CDS) who shall also function as Secretary to Government of India, Department of Military Affairs with effect from the date of his assumption of charge and until further orders,” the Defence Ministry said in a statement.

Born on May 18, 1961, Lt. Gen. Chauhan was commissioned into the 11 Gorkha Rifles of the Indian Army in 1981. He is an alumnus of the National Defence Academy, Khadakwasla and Indian Military Academy, Dehradun.

In the rank of Major General, he had commanded an Infantry Division in Baramulla sector in Jammu and Kashmir. Later as Lt. General, he commanded a Corps in the North East and subsequently became the Eastern Army Commander in September 2019 and held the charge until his retirement from service on May 31, 2021. In addition to these command appointments, Lt. Gen. Chauhan also served as Director General of Military Operations.

Snowden first arrived in Russia in 2013 after leaking secret files that revealed a vast web of domestic and international surveillance by the US government. The Kremlin subsequently granted him asylum, even as the US pursued espionage charges.

Snowden leaked documents that showed how the NSA collected huge amounts of data that passed through US-based Internet companies. He also revealed details about the classified US intelligence budget and the extent of American surveillance on foreign officials, including the leaders of US-allied countries.

Snowden’s decision to turn against the NSA came when he used his programming skills to create a repository of classified in-house notes on the agency’s global snooping and as he built a backup system for agency data, he wrote in his 2019 book “Permanent Record.”

Snowden is one of 75 foreign citizens listed by the decree as being granted Russian citizenship. The decree was published on an official government website.

Jhulan Goswami calls it a day
India women’s team bowling legend Jhulan Goswami announced her retirement from international cricket on September 23, adding that the team’s third and final ODI against England at Lords’ will be her last.

The 39-year-old lanky pacer played 283 international matches during her glittering career while taking 353 wickets. A bulk of that came in the ODIs as she took 253 wickets in 203 matches in the format.

Addressing the media ahead of her farewell game, Goswami revealed she has been thinking about retirement for a while now but injuries kept her from calling it a day. “Last two years I was thinking every series, each and every series is my last series because of injuries and ups and downs,” said Goswami from Lord’s. “After the World Cup also, I thought maybe the Sri Lanka tour would be my last series, but again I got injured in the last match of the World Cup and wasn’t fit enough to travel to Sri Lanka. And this is the last ODI series before the T20 World Cup, so why not this series.”

Dilip Tirkey is new Hockey India president
Former India captain Dilip Tirkey has become Hockey India’s first player-president after his unopposed election to the top post as yet another  sportsperson has grabbed the top job in a national sports federation.

Hockey India elections were scheduled to be held on October 1, but the results were declared in advance as there were no contestants for any post.

Tirkey, 44, is the latest addition to the list of players who have grabbed the top job in a sports body. There are presently five  major federations in India led by ex-athletes.

Cosmonaut Valery Polyakov passes away at age 80
Valery Polyakov, the cosmonaut who set the record for the longest single stay in space, has died at age 80, Russia’s space agency has announced.

Polyakov’s record of 437 days in space began on January 8, 1994, when he and two others blasted off on a two-day flight to the Soviet space station Mir. While aboard Mir, he orbited the Earth more than 7,000 times, before returning on March 22, 1995.

Polyakov had trained as a physician and wanted to demonstrate that the human body could endure extended periods in space. Polyakov previously had spent 288 days in space on a mission in 1988-89.

The announcement by space agency Roscosmos did not state a cause of death.