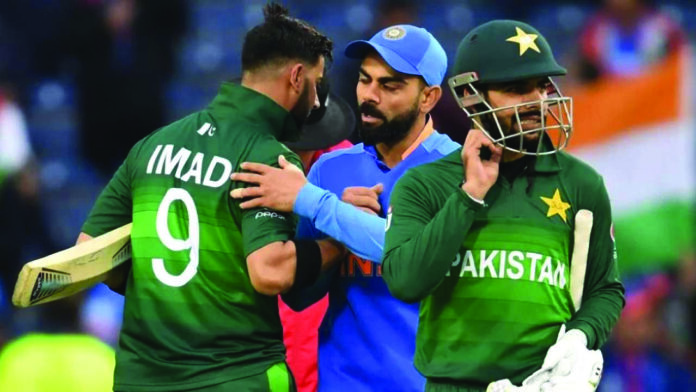 The start to the T20 World Cup was marked by surprise results. Nobody expected India to be hammered by a Pakistan team that had had no match experience of late and the West Indies’ falling for 55 was also unexpected.

The start of the T20 World Cup in the UAE has been full of surprises. Defending champions West Indies went down heavily to top seeds England, managing a measly 55 runs, while Pakistan hammered India by 10 wickets in a patently one-sided match. In other matches Bangladesh lost to Sri Lanka in a somewhat more closely fought qualifiers’ group I match, while Australia beat South Africa by 5 wickets.

The biggest shock was for India, the second seeds. India had, before this, never lost to Pakistan in any World Cup. At the Dubai International Stadium, Virat Kohli’s team – Pakistan won the toss and decided to field – managed a poor 151 for 7 in their 20 overs, skipper Kohli managing the highest score at 57 (off 49 deliveries), followed by Rishabh Pant 39 (30).

The main Pakistani destroyer was the 6-foot 6-inch Pushtun pacer Shaheen Afridi, who picked up 3 of the most critical wickets for 31. Hasan Ali also picked up 2 for 44.

Pakistan, a hollowed out team, so to say, with no international or even national experience for a long time, managed the winning 152 runs in 17.5 over without losing a wicket, Mohammad Rizwan (79 off 55) and skipper Babar Azam (68 off 52) remaining not out.

Shaheen Afridi was declared Man of the Match.

As champions West Indies took to the field, England elected to field and virtually blew the Caribbeans off the ground for a measly 55 in just 14.2 overs. Chris Gayle was the highest scorer with 13.

For England the main wrecker was Adil Rashid (4/2) as well as Moeen Ali (2/17). England notched up the 56 runs in just 8.2 overs, losing 4 wickets and with 70 deliveries remaining. Jos Buttler remained not out on 24. Player of the Match was Moeen Ali.

At the Zayed Cricket Stadium in Abu Dhabi, Australia won the toss and elected to field first. South Africa were limited to 118/9 in their 20 overs, Aiden Markram scoring 40 IN 36 deliveries and Kagiso Rabada remaining unbeaten on 19. Josh Hazlewood (2/19) and Adam Zampa (2/21) were the main wicket-takers.

Australia reached 121 for 5 in 19.4 overs, Steven Smith scoring 35 in 34 deliveries and Marcus Stoinis remaining unbeaten on 24 as the Aussies won by 5 wickets.

Steven Smith was declared Player of the Match.

Sri Lanka won the toss and elected to field, restricting Bangladesh to 171 for 4 in their 20 overs. Mohammad Naim scored 62 off 52 deliveries and Mushfiqur Rahim remained unbeaten on 57 (37 deliveries) at the Sharjah Cricket Stadium.

Sri Lanka scored 172 for 5 in 18.5 overs, Charith Asalanka scoring an unbeaten 80 off 49 deliveries and Bhanuka Rajapaksa scoring 53 off 31 deliveries.

Sri Lanka won by 5 wickets. Charith Asalanka was named Player of the Match.