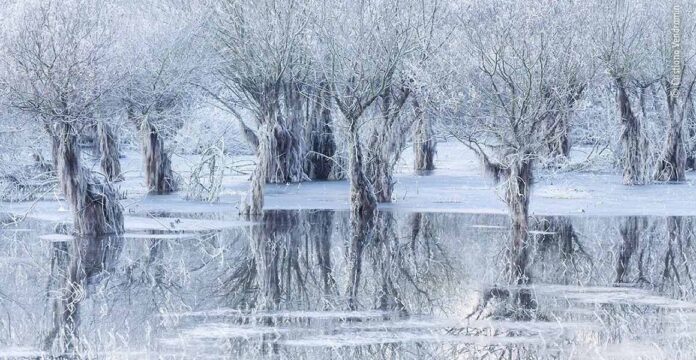 Great, emotive photographs still matter more than dumb social media posts. This year, People’s Choice Awards has nominated an image ‘Lake of Ice’, showing trees in the depth of winter, as the winner. The photo was the top liked in an online vote of 31,800.

The image was taken by Cristiano when he visited Santa Croce Lake in northern Italy, and noticed that the unusually high water was submerging some of the willow trees that fringed the edge of the lake. Inspired by the play of light and reflection on the lake’s icy surface, the scene reminded Cristiano of a dear late friend who had loved this special place.

Dr Douglas Gurr, the Director of the Museum, says, ‘Cristiano’s poignant image symbolises the positive impact nature can have on our wellbeing and lives. It can provide solace and a space to reflect on the past and even spark hope for the future.

JNU VC Kumar is new UGC chief
Jawaharlal Nehru University vice-chancellor M Jagadesh Kumar has been appointed as the new chairperson of the University Grants Commission (UGC). The Ministry of Education, Kumar said that he has been appointed as the chairman of the higher education regulator for five years. Kumar is currently acting VC of the varsity after his five-year term expired last year. The Ministry is yet to appoint his successor at JNU.

Jawaharlal Nehru University vice-chancellor M Jagadesh Kumar has been appointed as the new chairperson of the University Grants Commission (UGC).

He was appointed VC in January 2016, and a week later students protested against the administration’s decision to stop a protest over the hanging of Parliament attack convict Afzal Guru. Academically, though, Kumar is well known for his knowledge in the field of electronic engineering and associated areas. He has an MS (EE) and PhD (EE) from the department of electrical engineering, Indian Institute of Technology Madras.

Adani, 59, is a college dropout who started a commodity export firm in 1988. Back in 2008, he appeared on Forbes’ list of the World’s Billionaires worth $9.3 billion.  His Adani Group includes a mix of businesses ranging from power generation and transmission to edible oil to real estate and coal. The group has
six listed companies in India, the most valuable of which is Adani Green Energy Ltd, whose shares have soared by 77% in the past year.

Adani’s net worth has nearly doubled from $50.5 billion in April 2021 when Forbes released its annual World’s Billionaires list. During the same period, Ambani’s net worth grew by just 6.5% from $84.5 billion last April.

Madhabi Puri Buch is first lady Chairperson of SEBI
The Securities and Exchange Board of India (SEBI) has appointed its first lady chairperson in Madhabi Puri Buch. She replaces Ajay Tyagi. She is also the first non-IAS to head the regulatory body. Buch was SEBI’s whole time
member between April 5, 2017, and October 4, 2021. During that time she handled portfolios such as surveillance, collective investment schemes and investment management.

She brings with her nearly three decades of financial market experience. Having started her career in 1989 with ICICI Bank

She brings with her nearly three decades of financial market experience. Having started her career in 1989 with ICICI Bank, where she worked in corporate finance, branding, treasury and loans, before moving to ICICI Securities. She was also a consultant to the New Development Bank, set up by the BRICS bloc of nations.

She takes over at a critical time, with markets around the world are in the throes of extreme volatility, a result of the Covid pandemic, as well as the Russian invasion of Ukraine, hence has her task cut out. She will also be there when the mega LIC IPO is launched, in March.