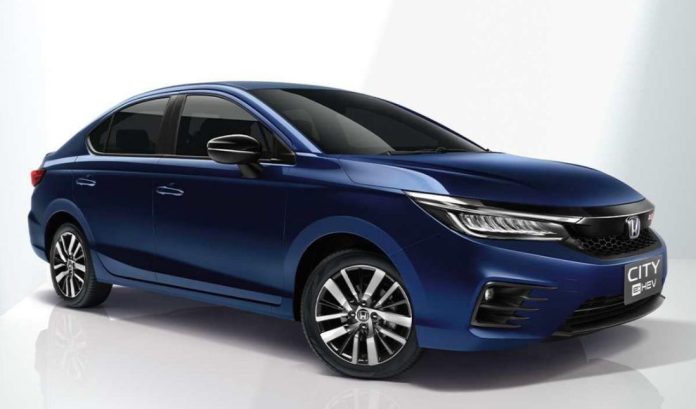 Honda is striking back at the competitors that have surfaced in India, especially in the mid sedan segment where it’s City, once a favourite, has taken a hit.

As you read this, the long-awaited Honda City Hybrid will have been unveiled in India. This was to have happened on April 14. This is Honda’s effort at bringing a globally successful brand identity to India, just like it did when it brought the City in the first place. Plus, this will be a reasonably priced EV as well.

The Honda City Hybrid was introduced globally in August 2020. Honda had planned for its introduction in India in 2021 itself, but it got delayed because of the Covid-19 pandemic that created lockdowns and production bottlenecks.

Honda starts a a modest target of being able to sell around 250-300 units of the City hybrid each month. This is just 10 percent of the regular model’s average monthly sales figure. If this catehces on, volumes will follow, feels the company.

There is a catch for this. The top-end variant of the City hybrid is expected to come in at around Rs 20 lakh, ex-showroom. That is a tad on the higher side, as compared with to the regular City, but is pretty regular price as far as current EV prices go.

Special Features
So, what are the special features of the Hybrid?

The City with hybrid powertrain is already on sale in select global markets. Its Malaysia-spec version shares design elements with the global-spec City RS. The automaker is likely to give the same treatment to the model that’s coming to India. The sedan carries sportier front and rear bumpers and black accents on the front grille, bumpers and ORVMs.

Reduced Boot Space, Increased Kerb Weight :Honda has equipped the hybrid City with quite a sizable battery pack, that not only makes it heavier by 110 kg, it also eats into its boot space. The Honda City Hybrid has a boot space the size of 410-litres, compared to the regular City’s massive 506 L of boot space. The hybrid model will also lose out on the spare tire, and get a puncture repair kit instead.

The Hybrid Mileage
The new City Hybrid sedan is likely to deliver a fuel economy of over 27kmpl. One must note that its Thai-spec and Malaysia-spec models promise 27.8kmpl and 27.7kmpl, respectively. These are NEDC (New European Driving Cycle) certified figures. In real world conditions, it will be around 20kmpl.

SPECIFICATIONS
Engine and Transmission: Under the hood of the upcoming Honda City is a 1.5-liter petrol engine that produces 98 Ps and 127 Nm of torque alone. As mentioned before, there are two electric motors that the engine comes mated to, and the main electric motor produces 109 Ps and 253 Nm of torque, powering the front wheels via fixed gear ratios. The combined power and torque features is yet to be combined. Transmission duties will be handled by a CVT automatic gearbox only.

Rear Disc Brakes: Due to its weight increase, Honda will equip the City hybrid with rear disc brakes and electronic brakes as well, for added safety.

Hybrids and Fuel Efficiency: Starting off with mains directly is the hybrid engine. The Honda City hybrid will be a proper hybrid with electric motors and one massive battery. The specs are yet to be confirmed. Its fully hybrid, compared to the mild-hybrid Maruti Suzuki Ciaz that equips a starter-generator motor only.