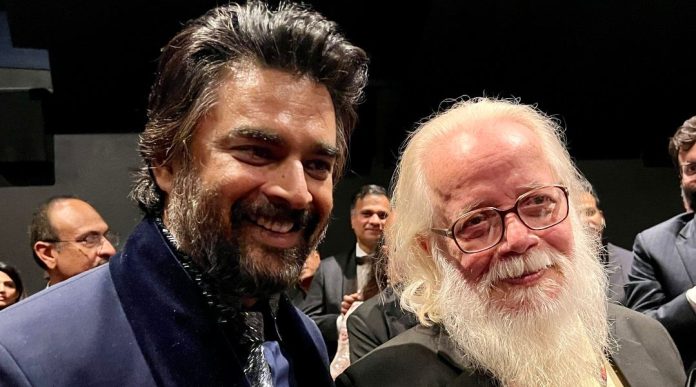 If biopics of famous people have been hits in the recent past, then why not a biopic on a famous scientist as well? Enough has been said about social illuminatis, probably the principal reason why India is feted around the world is its advance in the field of space science. Within this former scientist and aerospace engineer at the Indian Space Research Organisation (ISRO), Nambi Narayanan, fits the bill perfectly. Not only has he been a great scientific brain, but the way he was falsely implicated in a fictitious espionage case, is a shame on the systems that govern the country.

This was waiting to happen, and this, indeed, is happening. It is actor Madhavan’s directorial debut and is in English, Tamil and Hindi. The film showcases how Narayanan was falsely accused of espionage and subsequently, how all cases against him were dismissed by the Supreme Court.

That is the gist of south superstar R Madhavan’s film ‘Rocketry: The Nambi Effect’.

Rocket scientist Nambi Narayanan is in the news as soon as the trailer is released. Nambi Narayanan was a scientist of ISRO, who was implicated on false charges of betraying the country. In 1998, the Supreme Court declared him innocent after a 26-year-long battle and fighting the police-administration.

In 1994, Narayanan was falsely charged with leaking vital defense secrets to two alleged Maldivian intelligence officers, Mariam Rasheeda and Fauzia Hassan. Defence officials said the secrets pertained to highly confidential “flight test data” from experiments with rocket and satellite launches. Nambi Narayanan was among two scientists (the other being D Sasikumaran) that were accused of selling ISRO secrets for millions. However, his house seemed nothing out of the ordinary and did not show signs of the corrupt gains he was accused of.

The head of the ISRO’s promising Cryogenics Division, Nambi Narayan was tasked to scout for the cryogenic technology to propel the space programme to greater heights. He was arrested in 1994 for allegedly trading India’s space secrets to Pakistan. Kept in police custody for 50 days, the case was later transferred to the CBI.

As a senior official at the Indian Space Research Organisation (ISRO), Narayanan was in-charge of the cryogenics division. In 1994, he was falsely charged with espionage and arrested. The charges against him were dismissed by the Central Bureau of Investigation (CBI) in 1996, and the Supreme Court of India declared him not guilty in 1998.

The CBI later closed the case against him citing lack of evidence. Almost 24 years later, the Supreme Court said the charges against the scientist were trumped up by the Kerala Police.

Nambi Narayanan was awarded the Padma Bhushan, the third-highest civilian award by the Government of India, in 2019.

Pre-review
The film, which marks the directorial debut of R Madhavan aka Maddy, has opened to positive reviews from industry stalwarts including AR Rahman and Shekhar Kapur.

It is a perfect tribute to Nambi Narayanan and his contribution to India’s space advancement, at the same time it will also show the criticism and hatred he had to receive from his own people.

The first trailer of the biopic was launched on April 1. The film is written and directed by R Madhavan, who essays the lead role of aerospace engineer Nambi Narayanan in it.

The second trailer of the film doesn’t offer anything new but we are once again shown the determination of Nambi Narayanan in launching commercial satellites for India, for which he is ready to go to any lengths. He is even ready to leave the offer from NASA to serve his nation, but he is declared a ‘deshdrohi’. The trailer concludes with the words, “Sometimes a man wronged is a nation wronged.”

Development
A film based on the espionage case of Indian Space Research Organisation (ISRO) scientist Nambi Narayanan was first announced to the media in September 2012 by director Anant Mahadevan. Journalist C. P. Surendran had proposed the idea for a potential film on Narayanan to Mahadevan during June 2012. The two then met Narayanan in person to discuss the idea and seek his permission, and he agreed to serve as a consultant for the project.

Malayalam actor Mohanlal was cast in the role of Narayanan, while Resul Pookutty, Sreekar Prasad and L. Subramaniam were finalised as the sound designer, editor and music composer for the project. Titled The Witch Hunt, the film was to be made in the Hindi and Malayalam languages. The team were in talks with several production houses but the project eventually did not take off as planned. Mahadevan later narrated the idea of the film to actor R. Madhavan in the mid-2010s, who helped take the film forward

Production
Principal photography began on  January 4;2019 in Mumbai and was shot as a multilingual, with scenes simultaneously filmed in the English, Hindi, and Tamil languages. A few days after the start of the shoot, Mahadevan left the project owing to prior commitments and Madhavan took over as the project’s sole director. Film director and writer Prajesh Sen, who had previously co-written Ormakalude Bhramanapadham and worked on a documentary titled Nambi The Scientist, joined the project as a co-director.

In late January 2019, the team moved to film scenes in Georgia and Russia. The team completed the shoot five days prior to the schedule, despite shooting in unfavourable weather conditions. In April and May 2019, the team shot scenes in India, with Madhavan shaving his beard to play a younger version of the character. The team subsequently moved on to film the final schedule in France and Serbia. Production was completed in Serbia during June 2019, with Scottish actors Ron Donachie and Phyllis Logan also a part of the final schedule.

The shoot of the film took 44 days to complete. Post-production began in July 2019, with music composer Sam C. S. completing the background score by mid-October 2019. In August 2020, Madhavan revealed that the film had reached the final stages of post-production work and that only fifteen days of work were remaining to complete final sound mixing, mastering and digital intermediate tasks.

Budget
The estimated cost of this movie is over 100 crores.