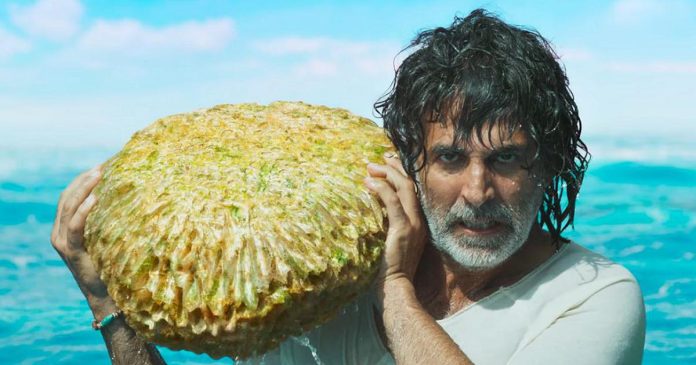 Ram Setu is also known as Adam’s Bridge. There is a 48 km long range between Rameswaram on the southeast coast of India and the island of Mannar off the northwest coast of Sri Lanka. It is mentioned in Hindu mythology as a bridge built by Lord Ram and his army to cross Lanka and fight Ravana. At the same time, according to Islamic stories, Adam used this bridge to reach the peak of Adam. According to scientists, Ram Setu is a natural structure, but for the past several years, it is being claimed by presenting evidence that it is not natural, but built by Lord Rama.

Director Abhishek Sharma’s film Ram Sethu too revolves around the same idea, but leaves the audience at a different juncture by fictionalizing the film.

Dr Aryan Kulshreshta(Akshay Kumar) is felicitated in Afghanistan by the archaeological department for discovering a treasure on archaeological site and saving it from Taliban. Upon his return he is promoted as the director in his organization and gets the chance to make a report on going issue in the country about Ram Setu being natural or manmade as government plans to demolish it due to industrial development.

Aryan’s being an atheist drafts his reports which creates and issue over the country about Ramayan and existence of Ram for which he faces suspension and his family has to face the brunt. His wife asks him to stay away from the controversy for family sake but Aryan decides to clear his name and gets chance to work with Pushpak Shipping whose owner Indrakant is behind the urban development and wants evidence on Ram Setu not being built by Ram.

Aryan arrives at the site of Ram Setu and gets to work with project manager Bali and his team one being Dr Sandra Rebello, but underwater he has to work carefully and not cross Sri Lankan borders due to ongoing civil war.

Aryan discovers a floating stone underwater which proves that Ram Setu existed in BCE and was possibly built by Ram, but Indrakant asks for more evidence to prove the same. Aryan, Sandra and Dr Gabrielle go on a night mission underwater to unfold the mystery, but find that they have been made scapegoats in a secret plan and have been left to die under water in stormy weather by Bali and Indrakant.

Dr Gabrille acts smart by taking the floating stone along with them as she suspected Bali, in mid sea they are saved by a Srilankan fisherman AP. Bali finds that the stone is missing and decides to chase them but AP helps them cross the borders and the stone goes missing in the chase while Gabrielle is shot by Bali. Aryan now along with Sandra and AP decides to prove the existence of Ram and Ram Setu by doing his research across borders in Srilanka which has the existence of Raavana and itself will be a big evidence that Ram Setu was not natural but built by Ram.

Review
First things first, Ram Setu is enjoyable. It is in parts slick and in other parts, quite thrilling. The credit for that goes to a good story backed by some of the best background scores used in a Hindi film this year.

The VFX and CGI are questionable indeed, as the trailer had indicated. The scenes with the diving suit are cartoonish, almost. But what makes up for that is the stunning underwater sequences. The way director Abhishek Sharma has captured the beauty and grandeur of Ram Setu under the Indian Ocean is reminiscent of BBC Earth’s Blue Planet documentary.

Ram Setu has a promising plot, but writer/director Abhishek Sharma wasn’t ambitious enough to take things a notch higher. His writing is filled with convenient episodes, where most things happen easily and the journey to prove the existence of Ram Setu is devoid of enough thrill.

There is an entire sequence in the second half, where the leads are stuck in the middle of a jungle – there’s so much that could have been done in this with challenges from natural forces like animals, landslides, etc. but Abhishek instead prefers to keep it all linear and convenient.

Jacqueline Fernandez and Nushrratt Bharuccha’s characters are undercooked, whereas Nassar and Pravesh Rana, who are the negative forces, don’t get enough scope to be worthy opponents.

There are logical loopholes in multiple key plot points and the team could have approached this in a smarter way. The thrill of the pre-interval chase sequence (without spoilers) gets diluted due to a major lapse in the thought behind the stunt design.

The visual effects could have been a lot better, especially in the underwater scenes.

Akshay Kumar tried to ride on the emotions of the majority of the Hindus with his film Ram Sethu releasing it on Diwali. Though the idea is right and Akshay Kumar tried his best to take the film to a new level, he failed miserably to save Ram Sethu.

Akshay Kumar is ok in his role as the archaeologist but one gets a routine feeling as viewers have seen him do such roles earlier in his career. Satyadev Kancharana made a decent debut in Bollywood with his performance. Though his role looked silly and illogical to the core, he made the right impact with his expressions and mannerisms. Jacqueline Fernandez is ok in her role as the scientist while Nushrratt Bharuccha is ok in her role as Akshay’s wife. Nassar is apt in the role of shipping corporation CEO. Others performed accordingly.

Ram Setu works best when the protagonists are out on the field, in the thick of the action. As Dr Aryan and his comrades search for the historical evidence for Lord Ram’s tale, the viewer is engaged. But it falters the moment there is a lull in the action. We suddenly begin to notice how people can barge into the Supreme Court of India with an ‘I object milord’ and not get arrested (or shot). We notice how Akshay’s character is the only one doing any deduction and thinking and everyone else is just along for the ride, hardly contributing much.

We also notice small continuity errors, like Akshay’s beard changing into a stubble and then back again in successive scenes.

Daniel B George’s music and background music failed to make an impact. They turned out to be below average. Aseem Mishra’s cinematographer is ok but VFX turned out to be extremely poor. Editing of Rameshwar S. Bhagat left so many drags that it ended up testing the patience of the viewers

Production:
Director Abhishek Sharma has been trying to build a plot since 2007 when he became aware of a court case involving Ram Setu. The film is co-produced by Akshay Kumar’s mother Aruna Bhatia and Vikram Malhotra under the production companies Kumar’s Cape of Good Films, Abundantia Entertainment, Lyca Productions and Amazon Prime Video. This is Amazon’s first Bollywood production in India. Aruna Bhatia died in September 2021. Chandraprakash Dwivedi was signed as the creative producer. Kumar described the film as “a bridge between generations past, present and future”.Co-producer Vikram Malhotra, CEO of Abundantia Entertainment, touted the film as “a story formed on facts, science and historical heritage”.

The film team consulted the book Dating The Era of Lord Ram (2004), as well as experts in archeology and other areas.

The official announcement of the film was on November 14, 2020 coinciding with Diwali. Earlier reports in December 2020 suggested that the film shooting would take place in Ayodhya and the proposed film city in Gautam Buddha Nagar district of National Capital Region in Uttar Pradesh.The muhurat shot followed by a puja ceremony by the team was held on March 18,2021 at Ram Janmabhoomi temple in Ayodhya.  A planned visit to Ram ki Paidi ghats in Ayodhya by the lead actors was cancelled due to a large uncontrolled gathering of people.

Views on News Editor Sujit Bhar introduces the April 1, 2022 edition of the magazine.