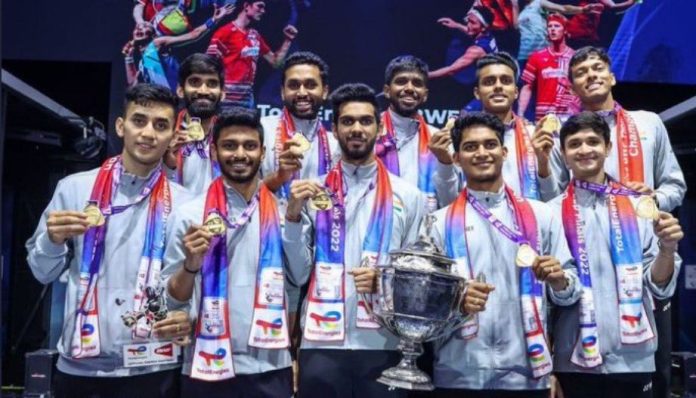 Indians have been making large strides in badminton in the past few years. On Sunday, May 15, it all came together, when the Indian men’s badminton team won the Thomas Cup, the sport’s biggest international trophy, for the first time ever. The victory was even more special, because not only did they dethrone holders Indonesia in 3-0 in the final, they had also overcome a tough Denmark in the semi-final.

It must be remembered that before India, only five nations had won this Cup in its 73-year history. Those countries were Indonesia, Denmark, China, Japan and Malaysia. Indonesians are 14-time champions. In Bangkok, India became only the sixth nation to triumph. That means India created badminton history.

India’s superman of the final was, of course, Kidambi Srikanth, who finished off the final with a perfect win. The Satwiksairaj Rankireddy and Chirag Shetty duo, Srikanth and Lakshya Sen won their matches to make sure Indonesia were blanked 3-0 in the final.

The start was perfect for India, with Lakshya Sen overcoming his early setbacks to beat Anthony Ginting 8-21, 21-17, 21-16. Then the Satwik-Chirag duo defeat the Indonesian pair of Ahsan and Sukamuljo18-21, 23-21, 21-19. In the deciding final singles game, Srikanth beat Jonatan Christie 21-15, 23-21 to clinch the coveted trophy for India.

While before the final it seemed to be a rather tall mountain to climb, having tackled and beaten the Danes in the semis, this actually proved somewhat easier. Not that takes anything away from the great victory, though.

As soon as Srikanth finished off his rival, his teammates, coach Pullela Gopichand and manager Vimal Kumar rushed to the court and cheered him. The joy was immense. The entire Indian was jumping in joy after the victory, shouting Bharat Mata ki Jai.

Later, Gopi said about India’s travel to the final and then to victory: “This is big. To actually beat these countries back-to-back is amazing. To have all the players do so well, consistently over the last few days is something very, very good. I am happy to see what has unfolded in Thailand.”

Srikanth, especially, has been the key to India’s win. He has been immensely consistent and in top form. In this Thomas Cup tournament he has won all five matches he played. He has grown with experience and now his stroke-play is as exquisite as his determination.

Indinesians, the most successful team in this tournament were in their 21st final.

Interestingly, almost the same team had played in earlier Thomas Cup tourneys and had not been able to shine. This time it seemed all came together. The team had decided to never give up and kept coming back after every blow and eventually could deliver the knockout punch.

The other losing semi-finalist, Japan, got bronze medals. Japan had lost 2-3 to Indonesia in another nail-biting semi-final clash on the same day. Denmark also got bronze. Denmark had lost to India 2-3 on Friday (May 13).

INDIA’S JOURNEY TO THE TROPHY