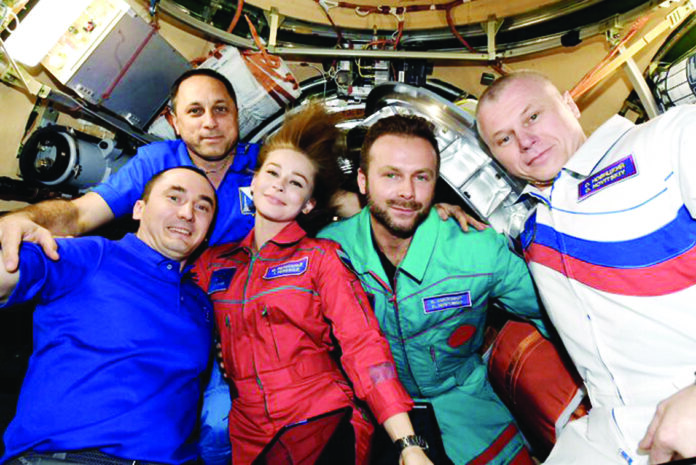 In a historic first, Russia not only launched an actor and a film director into space to make a feature film in orbit, the two, plus the cosmonaut, have already returned to Earth. We will soon know how the rest of the filming work will progress. Russia’s space project chief has hailed this as a chance to raise the prestige of Russia’s space programme. Frankly, the programme has now beaten the proposed Tom Cruise starrer Mission Impossible, with Elon Musk’s SpaceX and NASA, set for next year.

Russian actor Yulia Peresild (37) and director Klim Shipenko (38) had blasted off for the International Space Station (ISS) in a Russian Soyuz spacecraft together with cosmonaut Oleg Novitskiy of Roscosmos, a veteran of three space missions. Their Soyuz MS-19 had lifted off as scheduled from the Russian space launch facility in Baikonur, Kazakhstan.

The Russian film crew spent 12 days at the ISS, shooting scenes for the first movie in orbit.

Following their return to Earth, they moved to the recovery staging city in Karaganda, Kazakhstan on a Russian helicopter, before boarding a Gagarin Cosmonaut Training Center aircraft to return to their training base in Star City, Russia.

The movie’s plot has been mostly kept under wraps along with its budget. However, it is said to centre around a female surgeon who is dispatched to the ISS to save a cosmonaut.

As the film crew docked at the ISS earlier this month, the cosmonaut had to switch to manual control. Their landing will be documented by a film crew and will also feature in the movie, Konstantin Ernst, the head of the Kremlin-friendly Channel One TV network and a co-producer of “The Challenge”, said.

The project in space went off well, with the crew feeling fine and all spacecraft systems having functioned normally.