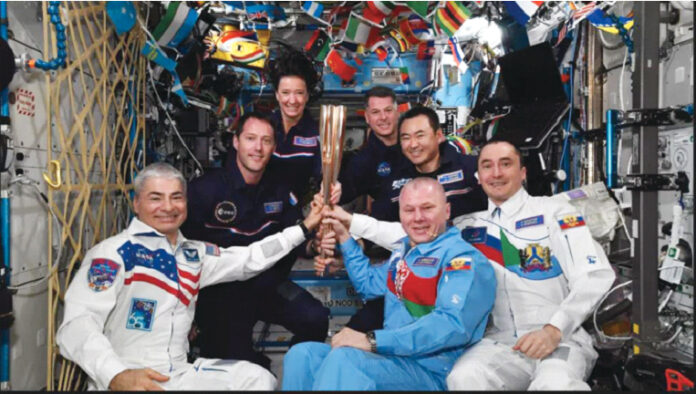 The ethos of the Olympic Games has reached beyond the boundaries of this planet, way up in space. The advent of the Tokyo Paralympics Games was celebrated by astronauts at the International Space Station. On the opening day of the Paralympics on August 24, Russian cosmonaut Oleg Novitskiy posted a photo on Twitter, showing the current seven occupants of the International Space Station (ISS) posing with a “torch” inside one of the station’s modules under a ceiling decorated with national flags.

The golden torch, representing the torch relays that happen prior to an Olympic Games, a tradition handed down from the first modern Olympics held in Athens, Greece, in 1896, was, obviously, not burning. But the huge symbolism was not lost on sports lovers across the globe.

It can be said that the astronauts on the ISS held their own Summer Olympics in orbit. They also enacted a cosmic closing ceremony. What they did in between was a mesmerising set of weightless synchronised swimming, sharpshooting and even a new sport: “no-handball.”

The Expedition 65 astronauts celebrated the close of the Tokyo Olympics and the next summer Olympics in France in 2024 with a unique handover (of the torch) between Akihiko Hoshide (representing his home country of Japan) and Thomas Pesquet (representing France).

Pesquet’s Twitter feed showed Hoshide first handing over a small Olympic flag to Pesquet inside Japan’s Kibo laboratory module in a symbolic passing of the torch for the Summer Games. The two astronauts shook hands. Pesquet then left the small flag floating while Hoshide pulled out an even larger one, with the Olympics symbol on the front and “Paris 2024” on the back. The astronauts then “blasted off” towards the ceiling of Kibo, leaving the Paris 2024 logo floating, facing the camera.

It was an extraordinary depiction of sports’ biggest extravaganza in space.