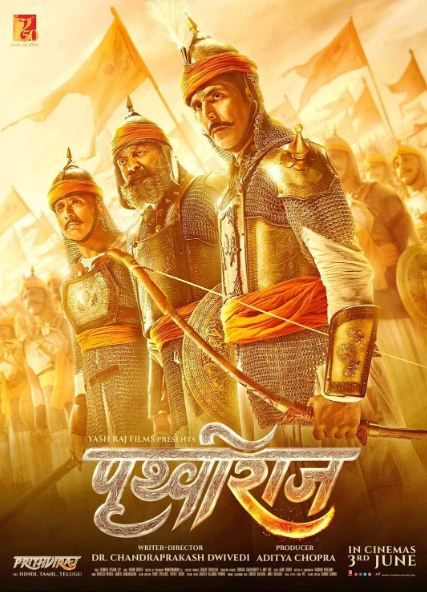 The story of the film ‘Prithviraj’ is based on the book ‘Prithviraj Raso’ by Emperor Prithviraj Chauhan’s poet Chand Bardai. One of his compositions ‘Mat Chuke Chauhan’ is very popular even today. This poem was composed by Chand Bardai in the 12th century. Addressing Prithviraj Chauhan, he wrote, “Four bamboo twenty-four yards Angul Ashta Praman ta Upar Sultan hai, don’t miss Chauhan!” Here the mention of Sultan i.e. Mohammad Ghori, who had imprisoned the emperor by deceit. Prithviraj, who defeated Ghori 16 times in the war, forgave him every time. But for the 17th time he defeated the emperor with the help of Raja Jaichand.

Yash Raj Films’ first historical film, Prithviraj, is based on the life and valour of the fearless and mighty King Prithviraj Chauhan. This film essays the role of the legendary warrior who fought valiantly to protect India from the merciless invader Muhammad of Ghor.

The entire focus of the story of this film is being made on the fight and love story, where Prithviraj Chauhan’s fight with Mohammad Ghori and his love story with Sanyogita will be shown.

Prithviraj III, known as Prithviraj Chauhan, was born in 1166 AD and died in 1192 AD. He was a Rajput warrior king of the Chahamana (Chauhan) clan of rulers who had the strongest kingdom in Rajasthan.

He ascended the throne at a young age in 1177 AD. His empire stretched from Shanishvara (Thanesar, once the capital of the 7th-century ruler Harsha) in the north to Mewar in the south.

He crushed the revolt from his cousin Nagarjuna and also defeated Parmardin Dev Chandela, the ruler of Jeja Bhukti in 1182. In the course of his aggressive campaigns, he came into conflict with Jayachandra, the Gahadavala ruler of Kannauj.

Prithviraj Chauhan fought the battle of Taraori in 1191 against the Ghurid ruler Muhammad Ghuri. In the first battle, Ghuri was seriously injured and his forces withdrew only to return back with a seriously large army.

He raised an army consisting of Persians, Afghans and Turks for the second battle. Prithviraj is said to have been defeated in that battle due to the animosity among the Rajput kings themselves with no one to help him against the fight.

Prithviraj Chauhan was blinded and imprisoned by Mohammad Ghori, and what later followed brought him fame. In a demonstration of the archery skill of the ruler in Ghori’s court, he struck the Ghurid ruler himself following poetry recited by Chand Bardai instead of aiming blind, his arrows at the metallic sounds.

Some of these moments of history will be shown in this film, which would not have been seen on the screen before this.

Akshay Kumar will be seen as Prithviraj Chauhan in this film.

Sanyogita is considered to be the most famous among the 13 queens of Prithvi Raj Chauhan. The movie is also based on the love story of these two. Manushi Chillar is the heroine.

Pre-review
Dr Chandra Prakash Dwivedi, who studied medicine, has directed the film. He is known for the famous TV serial ‘Chanakya’. After this, he also directed the film ‘Pinjar’ based on the Indo-Pak partition released in the year 2003. He has mastered the filming of mythological characters, which is possibly the reason why Yash Raj and Akshay Kumar have expressed confidence in his direction.

This is Yash Raj Films’ first historical film. However, Akshay, say fans, has not been able to live to expectations.

Characters that Akshay will have to face a tough challenge.

Budget
This is a high-budget production, going up to Rs 300 crore.

Development
Chandraprakash Dwivedi had completed the script for Prithviraj in 2010, and his first choice for Prithviraj’s role was Sunny Deol, with Aishwarya Rai as Sanyogita. However, due to Deol’s date issues and no production house interest, he left the project and it was almost shelved, but Dwivedi wanted to still make Prithviraj and after struggling for many years in finding a producer to come on board for him, Yash Raj Films offered to produce the film in 2018, thus reviving the film.

In March 2019, Akshay Kumar confirmed that he had been persuaded to star as Prithviraj. The film’s official announcement was made on Kumar’s 52nd birthday (September 9, 2019), with a motion poster released by Yash Raj Films on social media.

Production
Principal Photography commenced on November 15, 2019 at Jamwaramgarh, Jaipur, Rajasthan, and a song was shot in January 2020, but the filming was stopped in March 2020 due to the Coronavirus lockdown in India.

Ahead of the 2020 monsoon season, sets created in Rajasthan were taken down because the cost of maintaining them during the lockdown was too high. With no filming expected to take place before the monsoon season, the two sets erected in Dahisar (one of a palace and one of an arena made for an action sequence) were destroyed and instead an indoor set was decided to be set up, for resumption of filming.

After 7 months, shooting finally restarted at YRF Studios in October 2020. Kumar was spotted at the sets on 10 October 2020, while Sood and Chhillar were a part of this schedule too. Filming wrapped up in February 2021.