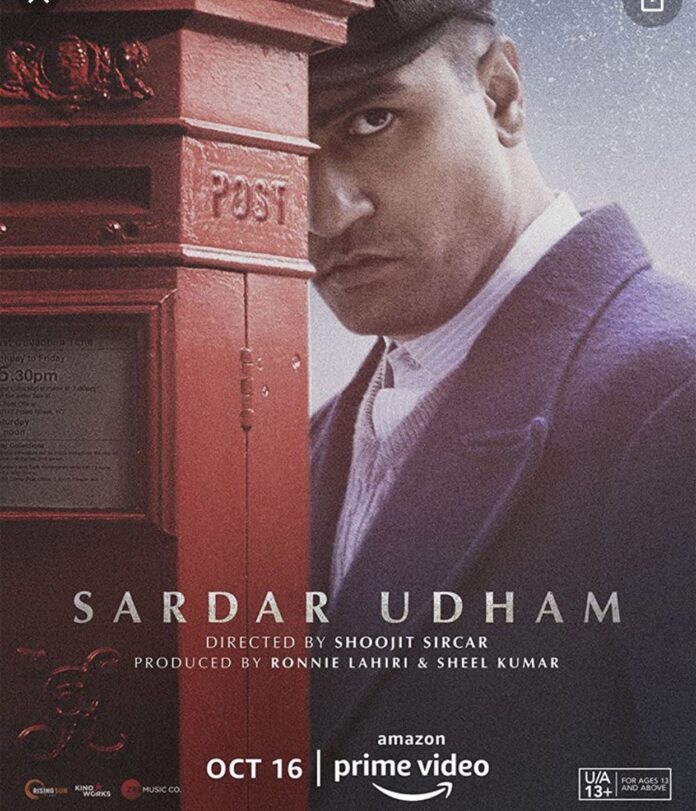 This is a biopic of Udham Singh. It was officially announced on March 4, 2019. Initially announced for a theatre premiere on Gandhi Jayanti in the year 2020, the release date of Sardar Udham was postponed due to some unavoidable reasons, evidently for the Covid pandemic. The film premiered on October 16 this year on Amazon Prime Video.

This is a historic movie with actual backgrounds as derived from historical documents. Sardar Udham is a biographical film based on Indian freedom fighter and revolutionary Udham Singh.

Udham Singh (who was born on December 26, 1899) was an Indian with Marxist beliefs. He belonged to the Ghadar Party and HSRA. He is known for his assassination of Michael O’Dwyer, the former Lieutenant Governor of the Punjab region of (undivided) India. The assassination took place on March 13, 1940, in revenge for the Jalianwala Bagh massacre in Amritsar in 1919, for which O’Dwyer was primarily responsible. Singh was subsequently tried and convicted of murder and hanged in July 1940.

Interestingly, while in custody, he used the name Ram Mohammad Singh Azad, which represents the three major religions of India and his anti-colonial sentiment.

The background of the story was how Udham Singh survived the massacre on the day of Baisakhi which killed around 400 people and injured around 1,000. He sets out to avenge those who died.

Udham, also referred to as Shaheed-i-Azam Sardar Udham Singh, travelled out of India in 1931 with the help of his acquaintance Nand Singh after being released from a jail in Rawalpindi. He reached Russia in 1934 via Afghanistan and then from there he boarded the ship ‘Carlonia’ and reached London in 1934. In London, he met Nand Singh’s acquaintances Surat Ali and Kopikkar etc.

While living in London, they worked secretly for the independence of India. Udham Singh refers to Bhagat Singh’s letter to these people, in which it was written “to go out somewhere to raise support”.

On March 13 1940, Michael O’Dwyer was scheduled to speak at a joint meeting of the East India Association and the Central Asian Society (now Royal Society for Asian Affairs) at Caxton Hall, London. Singh concealed a revolver inside a book, which has pages cut in the shape of a revolver.

This revolver was purchased by him from a soldier in a pub. He entered the hall and found an empty seat. As the meeting concluded, Singh shot O’Dwyer twice as he moved towards the speaking platform. One of these bullets passed through O’Dwyer’s heart and right lung, killing him almost instantly. Others injured in the shooting included Sir Louis Dane, Lawrence Dundas, the 2nd Marquess of Zetland and Charles Cochrane-Baillie, 2nd Baron Lamington.

Shoojit Sircar’s movie, though praised heavily, does carry a controversy. This is about copyright. Film producer Iqbal Dhillon — who had also launched Sonu Sood in Shaheed E Azam – has sent a public notice over the copyright on the life of Udham Singh.

On April 1, 1940, Udham Singh was formally charged with the murder of Michael O’Dwyer, and remanded in custody at Brixton Prison. Initially asked to explain his motivations, Singh stated: I did it because I had a grudge against him. He deserved it. I don’t belong to society or anything else. I don’t care. I don’t mind dying. What is the use of waiting until you get old? … Is Zetland dead? He ought to be. I put two into him? I bought the revolver from a soldier in a public house.

“My parents died when I was three or four. Only one dead? I thought I could get more.

Controversy
Shoojit Sircar’s movie, though praised heavily, does carry a controversy. This is about copyright. Film producer Iqbal Dhillon — who had also launched Sonu Sood in Shaheed E Azam – has sent a public notice over the copyright on the life of Udham Singh.

Dhillon’s notice stated, “We, Surjit Movies and Iqbal Singh Dhillon are the producers and the sole, exclusive and absolute owners of copyrights and all other rights and to all the works of the Punjabi and Hindustani film Shaheed Udham Singh: Alias Ram Mohammed Singh Azad.”