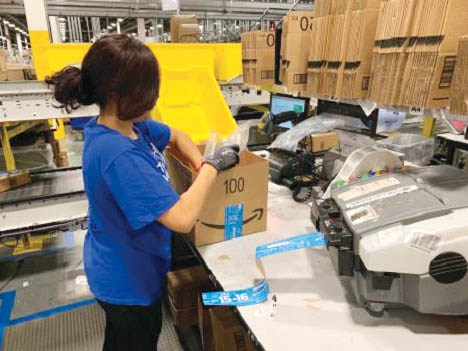 Amazon, the gazillion dollar online order corporation of Jeff Bezos, has long been accused of making its employees work so hard that they can’t even take toilet breaks. This is real, and one such incident has now grown into a major lawsuit.

A lady ex-employee, Maria Iris Jennitte Olivero, was fired by Amazon, because she had to take multiple toilet breaks, and that too, because she has a properly recognisable condition, called irritable bowel syndrome (IBS). She has now filed a lawsuit in the New Jersey Superior Court seeking damages and has also included a timeline of her employment at the company beginning from July 2020.

She used to work at the Amazon warehouse, from where items are packed, sorted and sent out worldwide. In her suit she has claimed that e-commerce giant fired her from the job for taking too many bathroom breaks.
Amazon has responded to Maria’s plea. It has filed its reply at the US District Court, attempting to move this case to the federal court.

Maria is suing the company for failing to accommodate an employee with a disability as per the New Jersey’s Law Against Discrimination. As per Maria’s filing, when she told a manager that she has IBS and will have to use bathroom for up to six times a day, the manager followed up by telling her to get a doctor’s note.
She also mentioned that her manager had said back in January that she had to submit a doctor’s note within five days but the first available doctor’s appointment was six days later, according to a published report. “At that time, (Olivero) was informed by (her manager) that it was ‘too late’ to provide a doctor’s note and that she was being terminated by Defendants,” her complaint stated.

Though she did not mention the amount she was seeking as damages, Amazon claimed she was expected to seek around $75,000 as damages. It also detailed Olivero’s wages in its filing. “Plaintiff earned $15.25 per hour, or $312,720.00 annualised, and received a $0.60 per hour shift differential, or $1.248.00 annualised. Therefore, at the time of this filing, plaintiff’s purported gross lost wages to date are $17,251.75,” Amazon said in its retaliatory filing.