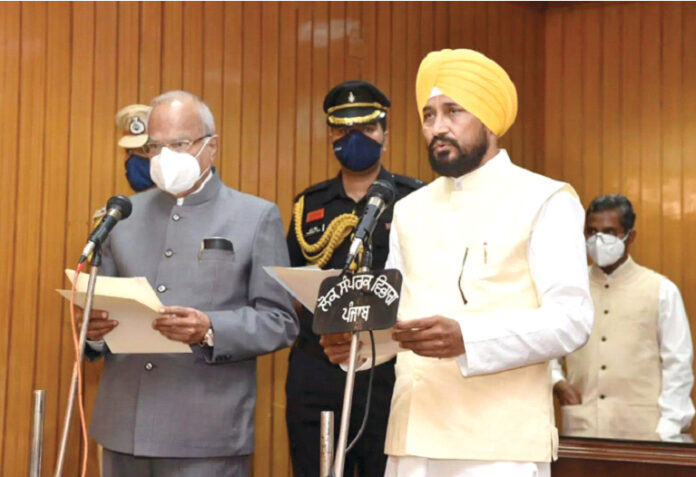 Who is Charanjit Singh Channi? Channi was born on March 1 1963, in a village called Makrona Kalan in the Rupnagar District of Punjab. As mentioned earlier, he belongs to the Dalit Sikh community. What that means is that when his forefathers took up Sikhism, they adopted all the great teachings and practices of the religion, but society forced them to cling on to their Dalit roots, something that never washes away in India.
As for education, he is studying law at Panjab University and has an MBA from PTU Jalandhar.
He entered political life early. Whiel doingt his final exams for school from Khalsa Senior Secondary School, Kharar, he was elected president of the students’ union. His interest in p;olitics remained strong as he enrolled for graduation at Sri Guru Gobind Singh College, Chandigarh. There, too, he was elected general secretary of the students’ union.
The Congress’ calculation of Dalits in Punjab was crucial in this choice. Of the state’s 3 crore (27.7 million) population, nearly a third – or 32% – are Dalits (Mazhabi Sikh – 10%, Ramdasia Sikh/Ravidassia (Chamar)/Ad-Dharmi – 13.1%, Balmiki/Bhanghi – 3.5%, Bazigar – 1.05%, Others – 4%) as per the 2011 Census.
That makes Punjab the state with the highest percentage of Dalits. This interesting tag helped Channi progress through the political rigmarole. He was elected to the Punjab Vidhan Sabha for the first time in 2007. He was again elected in 2012 and then in 2017. He was the Leader of the Opposition in 14th Punjab Vidhan Sabha. He was also the president of the municipal Council, Kharar for two terms and Municipal Councillor for three terms. He was member of the Punjab Pradesh Congress Committee and General Secretary of the Punjab Youth Congress, Member of Committee on Public Undertakings and Committee on Subordinate Legislation, Committee on Public Accounts and Privileges Committee of Punjab Vidhan Sabha.
Controversies
Of course, Channi is not without his scars. A #MeToo case is pending against Channi for allegedly sending an inappropriate text to a woman (an IAS officer) in 2018. In the absence of any complaint filed by the woman Channi said the issue was “resolved”. Only, it was not. The issue came to light, again, in May this year when the Punjab Women’s Commission sent notice to the state government asking for its response to the allegation. Punjab Women’s Commission chairperson Manisha Gulati has even threatened to go on a hunger strike if there was no action against Channi.
The second controversy has been about illegal mining. The allegation was brought by AAP MLA Bholath Sukhpal Singh Khaira, when he was the leader of the opposition. That happened in March 2018. Khaira had accused that Channi was involved in illegal mining through his nephew Bhupinder Singh. The minister of course denied the charge.
Khaira alleged that the Malikpur mine in Nawanshahr district was allotted to Kudratdeep Singh of Ludhiana, who is the business partner and close associate of Channi’s nephew Bhupinder Singh. Khaira has been quoted as saying: “The CM had tweeted about the illegal mining being carried out in the SBS Nagar area a few days back, I have provided the facts about it and now it is the CM’s turn to take action against the people responsible for it.” The CM at the time was Amarinder.
Nothing has been proved, the charges have bung around.
In another controversial move, Channi completed his oath taking by touching Rahul Gandhi’s feet.
Channi also believes in astrology. Good for him, but when this leads to his – this happened days after he joined the cabinet – creating an east-facing entry to his house by illegally constructing a road from a park outside his official residence in Sector 2, Chandigarh, on the advice of an astrologer, then it goes a bit out of hand.
Of course, the Chandigarh administration razed the road within hours. Then there is this case of his riding an elephant on the lawn of his house in Kharar – again on his astrologer’s advice. Images of this funny act have amused many on social media.
A self goal
It was Amarinder Singh who helped Channi return to the party in December 2010, three years after he had rebelled against Congress nominee for Chamkaur Sahib in 2007. He fought and won the seat as an independent, and went on to become an associate member of the Shiromani Akali Dal in the Assembly. At one point, he was considered close to Manpreet Badal, a minister in Amarinder cabinet.
Channi has, of course, been ambitious – and that is a red flag that Sidhu has to be wary of now. As he returned to the Congress, with Amarinder’s help, he reportedly made efforts to get in touch with Rahul Gandhi through senior Congress leader CP Joshi. Meanwhile, Amarinder was fighting his own battle, taking care of a good deal of infighting – as is the nature of Congress – to oust Partap Singh Bajwa from the post of Punjab Pradesh Congress Committee chief in 2015.
The journey has brought him thus far. Tweeted Channi: “Heartfelt gratitude and thanks to the top leadership for appointing me Chief Minister of Punjab… I will always work for the welfare of the people and to give new energy and momentum to the sustainable development journey of the state.”

“There’s a higher ideal than power, than ministers holding org positions. That higher ideal is ensuring peace, tranquillity & stability of a border state like Punjab. Under those circumstances what has been playing itself out is extremely unfortunate. Punjab is a border state, it’s going through intense social upheaval primarily because of angst in people against farm laws. Under those circumstances, if such shenanigans played themselves out in public space, it has serious implications on stability of a border state.”
-Manish Tiwari

“One man (Navjot Singh Sidhu) leaving/joining the party doesn’t affect our prospects to win the election, Congress will form the govt again… What he did is no less than betrayal”
–    Party leader Jasveer Singh Kamboj