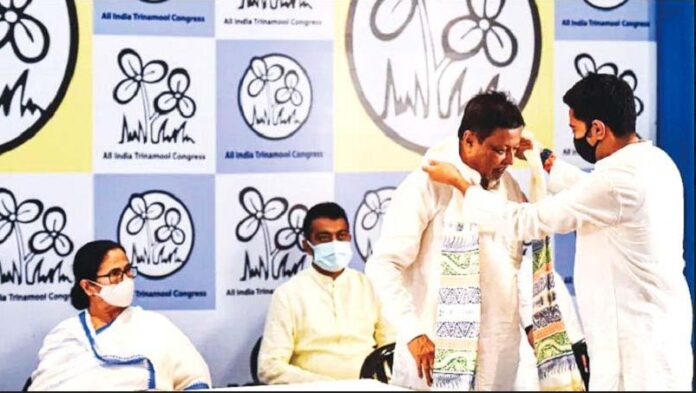 Politics is a quirky game of one-upmanship. In the middle, either the law gets squashed, or legal precedents are set. All depends on the point of view of the executive, the law as it is laid down, the judiciary and even the public. Mukul Roy is a case in point.
Roy was once an ardent follower of West Bengal Chief Minister Mamata Banerjee; he was one of the co-founders of the Trinamool Congress (TMC) itself in 1998. As a close aide of Mamata, he worked hard in organising the grassroots workers of the party, suffered hardships alongside his leader, inhuman torture and police shooting of July 21, 1993 when during a rally by the West Bengal Youth Congress under Mamata Bandopadhyay, the city’s police, under the CPI(M) shot dead 13 people, part of the crowd demanding Voter’s Identity Card to be made sole required document for voting.
That was the level of involvement of Roy with the TMC. The hard trudge yielded results when, in 2011, the incompetent, corrupt and worthless communists were routed in Bengal after 34 years of pathetic rule that killed industry and commerce with targeted precision and led the state – specifically under the authoritarian and corrupt leadership of Jyoti Basu – to total destruction.
Then, in 2017, Roy and TMC supremo Mamata seemingly had a fallout and Roy was suspended from the party (TMC) for six years as he met senior BJP leaders like the then finance minister, the Late Arun Jaitley and BJP general secretary Kailash Vijayvargiya. So he resigned from Trinamool Congress on September 25, 2017 and then also resigned from the Rajya Sabha membership on October 11, 2017.
Despite all the hoopla, Roy never really got his deal right in the BJP, though, and there was talk that Roy had always been the double agent that Mamata had planted in the rival camp. A double dealing Vibhisana, if you may. Check this out: Roy was elected on a BJP ticket in the Assembly polls in May (the Krishnanagar seat), and then ‘joined’ Trinamool Congress (TMC) in June (along with his son Subhrangshu). He was later appointed chairman of the Public Accounts Committee, a post usually reserved for an Opposition legislator.
There are two things to look into here. First, has Roy quit the BJP? This is a question everybody wants to know, and even the BJP will not divulge the secret. Secondly, has he officially joined the TMC? That too is in the realm of strange possibilities. Technically, it would be unwise for the state government to propose the name of a TMC member of the house to a committee that generally takes in an Opposition legislator. This is a very critical committee and Mamata surely wants it protected. So it seems that technically Roy is still a BJP legislator and even an elected BJP MLA.
That’s a lot to think for one man. But, wait, there is more. The Calcutta High Court has recently ordered the disqualification of Mukul Roy, as per the anti-defection law and West Bengal Assembly Speaker Biman Banerjee has approached the Supreme Court against that order of the Calcutta High Court. The BJP had earlier approached the Speaker seeking Roy’s disqualification under the anti-defection law and later had approached the high court on the issue and the court directed the Speaker to decide on the disqualification by October 7. It pointed out that in case the Speaker is unable to decide on the matter, it would take a call on disqualification.
Then things were stalled. When the matter had come up before the Calcutta High Court, TMC’s new Advocate General S.N. Mookerjee told the court that the Speaker had moved the Supreme Court against the high court order.
This is a crucial case, and how it transpires will decide a lot for Mamata. Meanwhile, not one among the scores of BJP leaders and workers who had either moved back or into TMC from the BJP since a number of years now has been disqualified.
That is the status of the case as of now.