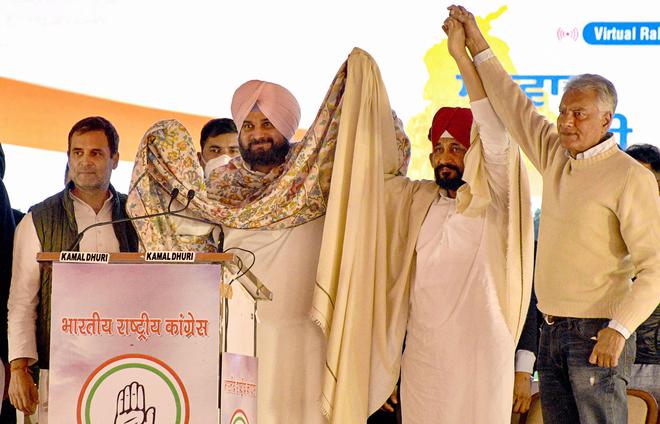 As expected, Congress leader Rahul Gandhi took a calculated risk and announced on Sunday that incumbent Chief Minister Charanjit Singh Channi will remain the party’s chief ministerial face for the Punjab assembly elections which will be held on February 20.

This, for now, brings to an end intense speculation on the position of Punjab Congress chief Navjot Singh Sidhu who had, on days prior to the announcement, directly challenged the Congress high command, saying in public that it (the high command) wants a “weak” chief minister for the state, who would dance to its tune.

Sidhu’s outburst – typical of his somewhat loose cannon nature, as former chief minister Amarinder Singh had described him – was evidently to pressure the party high command to give in to his demand that he be made chief minister, instead of Channi, the Dalit face of the party.

Technically, the Congress had no option. Having installed a Dalit face, with the elections in focus – the first Dalit chief minister of Punjab the party just could not go back and ruin its position in the polls.

Announcing this in Ludhiana on Sunday, Rahul said: “It’s a decision of Punjab. It’s not Rahul Gandhi’s decision. When you asked me to decide on CM face, I asked the people of Punjab, I asked party candidates, workers, the youth, and the working committee members. And the reply they all gave me that decision I am sharing today.

My work is to listen and understand your voice, I may be having an opinion, but the opinion of Punjab is more important than my opinion. People of Punjab said that they want a Chief Minister from a poor family. The one who understands poverty and the pain of the poor because Punjab needs such a person. I also have a similar opinion.

Well said, though Channi can be called anything but “poor”. This year his declared assets are at Rs 9.44 crore. That makes him anything but poor. Also, while he has not been convicted in any case, there are corruption cases already against him, and the Aam Admi Party (AAP) is harping on it loudly.

The decision announced by Rahul is, of course, a tactical one. He is close to Sidhu, and it is quite understandable that while Channi can be the election face of the party, Sidhu stands close in line for the top job in the state. Congress has the reputation and history of sacking chief minsters – a trait the Bharatiya Janata Party (BJP) has assumed of late – and what happens to Channi after the elections are over is anybody’s guess.

“The people who think politics is an easy thing let me tell you that they are mistaken, making a leader is not an easy job, numerous people surrender. You know about Mr Channi, he is a son from a poor family, he deeply understands poverty, in his blood and heart it’s all Punjab… Even Navjot Singh Sidhu carries Punjab in his heart.

Mr Channi became the Chief Minister of Punjab; you must have noted that even though it’s the top post, did you (people) see any arrogance in him? No, not at all. He goes in public and meets them with humbleness.”

Again, well said. But, maybe, Rahul should not have stressed on this “poor” word.

Channi, too spoke. He said: “I sincerely thank the Congress high command and people of Punjab for bestowing their trust in me. As you have seen us work so hard in the last 111 days to take Punjab forward, I assure you to take Punjab and Punjabis on the path of progress with new zeal and dedication.”

AAP’s chief ministerial candidate, Sangrur MP Bhagwant Mann was attacked by Channi, who said running a state is responsible work and people like Mann won’t be able to do it. He said the Chief Minister should work for the benefit of the State and should not work based on diktats from Delhi.

AAP’s chief ministerial candidate, Sangrur MP Bhagwant Mann was  attacked by Channi, who said running a state is responsible work and people like Mann won’t be able to do it.

Punjab has a 32 per cent Dalit vote “bank” which Congress wants to assure.

Channi claimed that Punjab has the lowest power tariff in the country and his government has made efforts to help farmers and workers. This was against AAP’s promise that the first 300 units would be free.

On stage, Sidhu praised Channi, saying that Channi has brought a lot of changes in the state in the 111 days he has been Chief Minister.

CHANNI’S ASSETS
According to his poll affidavit, he has assets worth Rs 9.44 crore.

Channi and his wife’s total liabilities, including a car loan, stand at Rs 88.35 lakh.